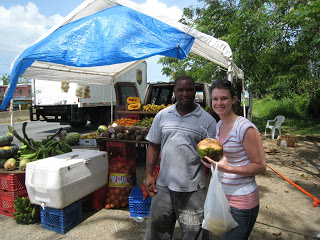 I’m going to try to keep the second half of the Puerto Rico adventure short and sweet. I keep thinking someday this blog will be current, but I’m not sure we’ll ever catch up 🙂

We finally stopped at a roadside stand after passing them all and saying, “we should stop and buy some fresh fruit,” dozens of times. I’m holding a coco frio in the picture. They just chop off the top of a coconut and put a straw inside to drink the juice. It was… not my favorite drink, but it was interesting. We also bought some really good bananas. 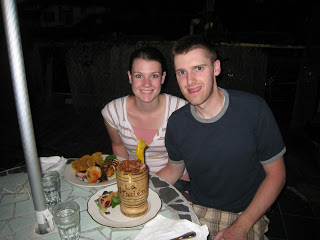 Using tripadvisor.com we found a highly rated restaurant that was close to the condo, La Estacion. We decided to venture out and boldly go where many had gone before. We enjoyed another delicious mofongo and an amazing dessert! Thinking of that banana turnover still makes us drool. 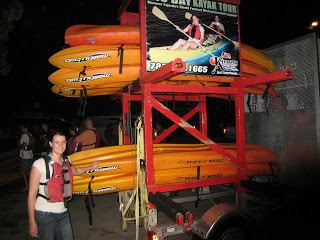 Later that evening we went on a BioBay Kayaking tour. Basically you kayak down a river into this bay that has tiny microscopic creatures that thrive there. When the micro-organisms are moved they emit a tiny light and glow. So when you run your hand or your paddle through the water it glows!

It was a full moon out so you couldn’t see the bioluminescence as well. Our tour guide had brought a tarp and we took turns putting the tarp over our canoes to block out as much light as possible. When it was this dark we could splash the water on our legs and watch little green drops of water trickle down our legs. It was really neat. Unfortunately this bioluminescence is pretty much impossible to take a picture of. The guide told us that many professional photographers 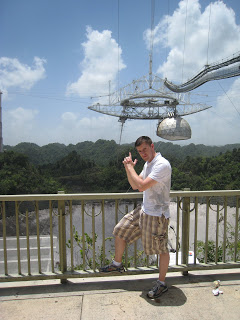 had tried their hand at trying to capture them on film, but all had failed. Though we were told professionals had failed… we still tried. And surprisingly, we couldn’t do it either.

The next day we went to the Arecibo Observatory where (as hinted by Chris in the picture) one of the James Bond movies was filmed. It is a thrilling fight scene as they slide down the giant satellite dish. Even while standing and staring at this giant dish, you still can’t comprehend how large it really is. They have some of the panels on display so you can try to understand 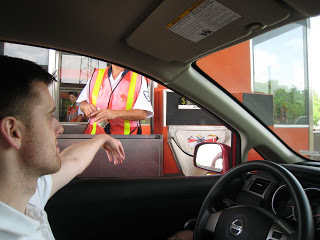 the scale.
After the Arecibo Observatory, we raced to the airport to catch our flight to the Dominican Republic.

The road we drove to get there had tons of tolls. It was a good thing we kept cash on hand. The last important lesson we learned on this trip is that the baggage check for international flights closes 40 minutes before the flight leaves. No matter how much you plead with them… there is nothing they can do. We were extremely lucky because another flight was leaving shortly after the flight that we uh, missed.

All things considered, we had a really great time in Puerto Rico and would love to go back someday, if not solely for the purpose of eating another banana turnover at the La Estacion, mmmm…. 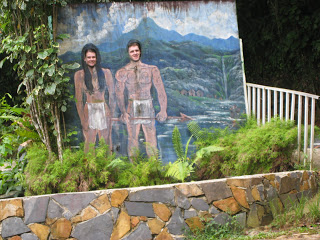 After what feels like an eternity of education, Brittany and I both graduated! We both walked at the Ceremonies on April 23, 2010. To celebrate, we took a small vacation to… PUERTO RICO!

(*Ahem* – Now Brittany is going to take over this blog post. I’m sorry if my part is not as witty as Chris’ part. I’ll do my best.)

PUERTO RICO!! We decided to have a loooong layover on our way to the Dominican Republic. We tried to pack as much adventure into those 3 1/2 days as we could, maybe a little too much adventure. We thought we’d learned everything during our years in school, but our days in Puerto Rico taught us a few very important (and somewhat costly) lessons. We’ll get to those stories a little later.

Our first day in Puerto Rico we hiked around the El Yunque Forest. As we drove into the forest we saw these cutouts and just couldn’t help ourselves. “Me Tarzan, you Jane.”

We have a mini tripod for our camera, and we love it. It makes photos like this possible (I’m not sure I’d want anyone taking a picture of me in a loin cloth anyways -Chris).

As we were driving toward the trail head, we stopped at this overlook, and as we were gazing out over the beautiful forest Chris had a great idea…. let’s look for a geocache! 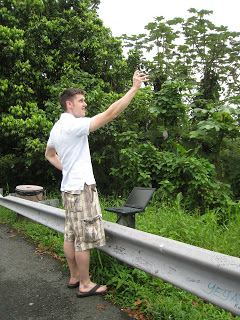 So, Chris pulled out his handy laptop/cell phone duo. As you can see in the picture, it took a little bit of effort to get reception, but we were successful. With great effort and after more time than we intended, we found the locations to several geocaches in the forest and set out to find them.

After starting our search for the geocache we realized several things: a) we weren’t sure which trail to take to find the geocache b) our GPS was quickly running out of battery c) we had to be out of the park by 6:00pm sharp or they’d close the gate and we’d be locked in the park. 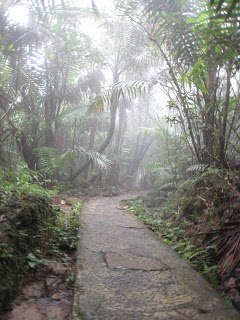 We used the car GPS to take us closer to what we thought was the trail head we needed to take: El Yunque Trail. Just our luck, it was one of the longest hikes in the forest.

Long story short, we turned on the GPS every twenty minutes to see if we were getting closer. After hiking for probably more than an hour, we think we were fairly close to the top, but it was nearly 5pm. We had to hike down and drive out of the park before 6pm, so we gave up and turned around to hike back. We weren’t entirely sure how long we’d been hiking, so we didn’t know how long it would take to get down. We ran down, just in case. I think we made it down in about half an hour 🙂 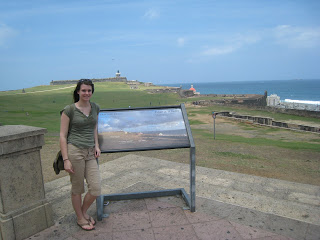 The next day we went into San Juan to tour the two fortresses: San Felipe del Morro & San Cristobal. San Felipe (picture on right) was 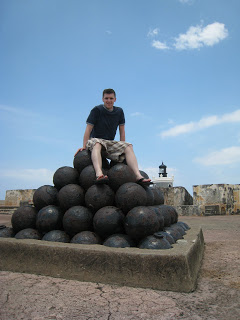 built up over many, many years from a single tower to the huge complex we see today to protect the harbor. San Cristobal was built to protect San Juan from a land attack. 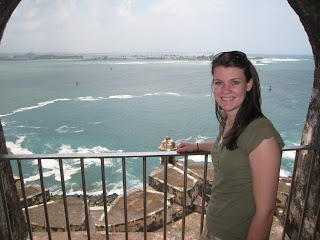 We spent the first part of the day touring San Felipe, and then we ate lunch on the grass in front of the fortress. We’d bought groceries so we didn’t have to eat out as often. Everyday for lunch and dinner we ate two pieces of turkey and a slice of cheddar cheese between two pieces of white bread with a little honey mustard for flavor. Yum. We grew to strongly dislike these sandwiches, but it got us through. 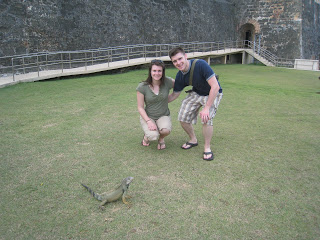 When we went to the third level of San Cristobal we found an iguana just sitting on the grass. I don’t know if an iguana could bite me, scratch me, or otherwise hurt me, 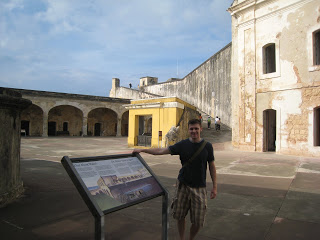 but I wasn’t going to take any chances. This is as absolutely close to the iguana as I ever wanted to get. I moved very slowly. The last thing I wanted was a frightened iguana running toward me. We learned later that the people on the island consider them to be a pest. They feed on bugs and therefore thrive in Puerto Rico. 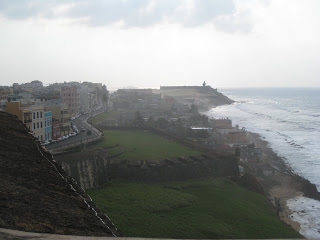 This picture ( 2 below) was taken from the top of San Cristobal fortress and in the distance by the ocean you can see the San Felipe fortress. You can also see part of the wall that used to completely surround old San Juan. 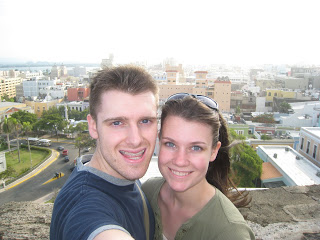 We stopped to take a picture while on top of the San Cristobal fortress. It was neat to see both the old and new parts of San Juan.

We wanted to try some authentic Puerto Rican food, so we asked our tour guide for a recommendation. She told us to go to Cafe Puerto Rico and get a mofongo. So, we did. I was hesitant to try something new, but I was sooo 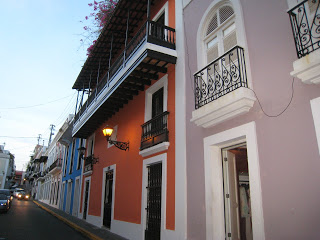 glad we did. I really liked the mofongo. It is mashed plantain that is deep fried (perhaps that’s why its delicious) and then they make a crater in the center which they fill with whatever meat you want.

Now don’t let this next picture fool you. I’m smiling, but I’m not exactly thrilled. We had planned to catch a ferry and visit the island of Culebra which claimed to have “one of the most beautiful beaches in the world.” We were pretty excited, but things didn’t go as planned. 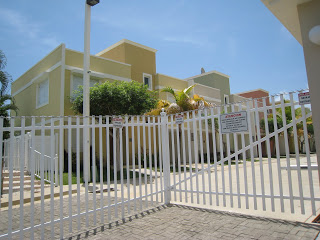 To give a little background information, the condos where we were staying were behind a gate and a wall that had spikes at the top. We were supposed to be parking in the garage attached to the condo, but the gate opener had a dead battery so we had been parking on the street outside the gate and wall. Two nights, no problems.

As we went out to our car that morning after the third night to catch the ferry to the most beautiful beach in the world, we found that our car window had been broken, and someone had searched the car looking for something to steal. Luckily, the night before I had debated it, but finally decided to take everything in with me so there was nothing for them to steal. 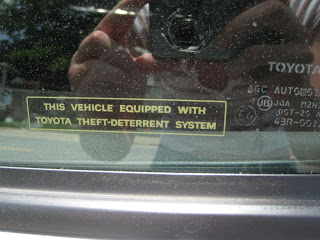 1) Toyota theft-deterrent system doesn’t really deter a thief 2) A $6 battery and twenty minutes is cheaper than a broken window and half of a day spent exchanging rental cars 3) Some credit cards cover car rental damage, but the name on the credit card and rental car driver have to match. Oops.

Well, there are more stories to tell about Puerto Rico, but this blog post is really long, and I need a lunch break before delving into the second half of our Puerto Rico adventure. 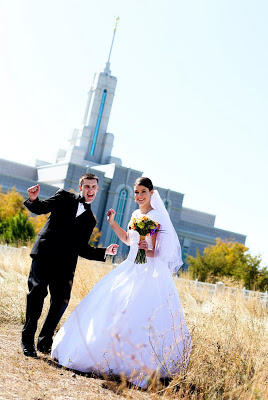 After 3 months of blissful marriage, Brittany and I figured it was time to start the obligatory “Newlywed Blog.” (It has now taken an additional 3 months to get this first post written and posted.) So here it is: The Jones Account. Hopefully it’ll be a slightly entertaining account of our lives to keep up-to-date with family and friends. It’s just so much easier than actual human contact.

Since this is the first post, we’ll start things off by noting that Brittany and I were married on October 6, 2009! The Mt. Timpanogos temple was beautiful, the weather was perfect, and taking pictures was a party!

After the dance party picture time, we headed to the informal luncheon, which we almost entirely missed (having a bit too much fun with the pictures). Thankfully, Mom saved us a plate! The reception that evening was a blast! I was so amazed, “Man! All these people came to see me! Of course, the truth is everyone came to see my beautiful bride, but I sure enjoyed the ego boost of my imagined popularity!

We were both so happy that the whole wedding day went without any terrible mishaps (that we know of). It was wonderful to share this blissful day celebrating with family and friends.

Following the wedding, we went on a fabulous honeymoon to Cancun, Mexico for about a week. And yes, we got married and took a honeymoon right in the middle of the semester. School didn’t seem to be the most important thing at that moment. Actually, going on the honeymoon right after the wedding was exactly what we needed. After spending months planning the wedding and trying to work and go to school, we really needed the break. We naturally had piles of homework assignments waiting for us when we got back, but we also had each other. (awwww…)