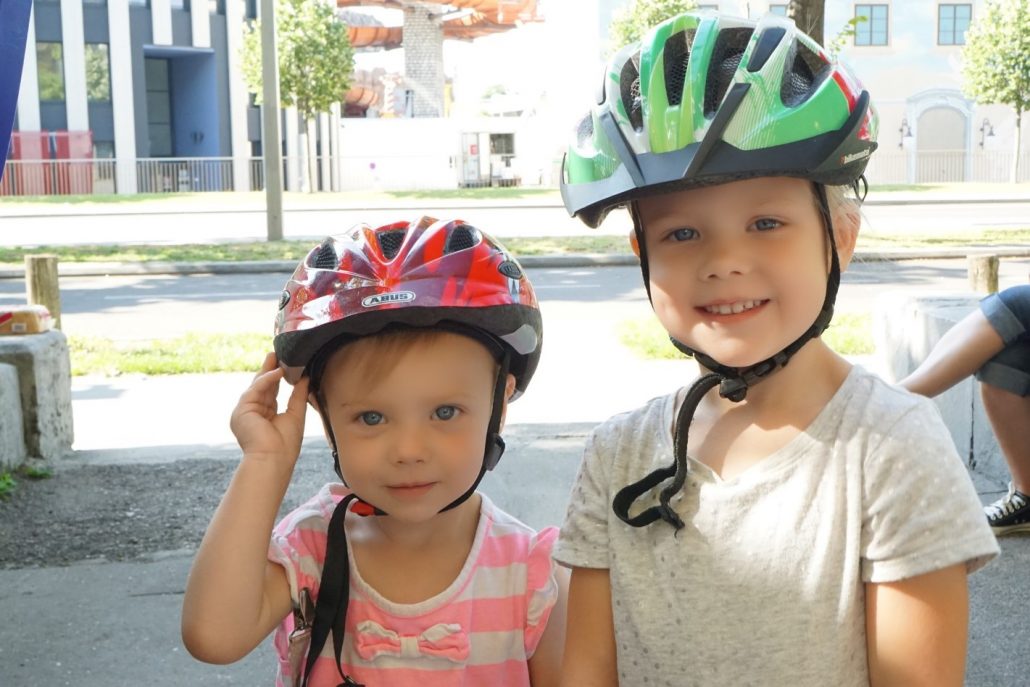 We decided to spend the morning biking around Vienna. It sounded like a great way to explore the city. As we neared the bike rental store, we realized that we were taking quite a risk. We’ve never taken the girls biking before. They could have a blast or absolutely hate wearing a helmet and being buckled into a strange contraption. We got the helmets on, and they’re still mostly smiling. So far, so good. 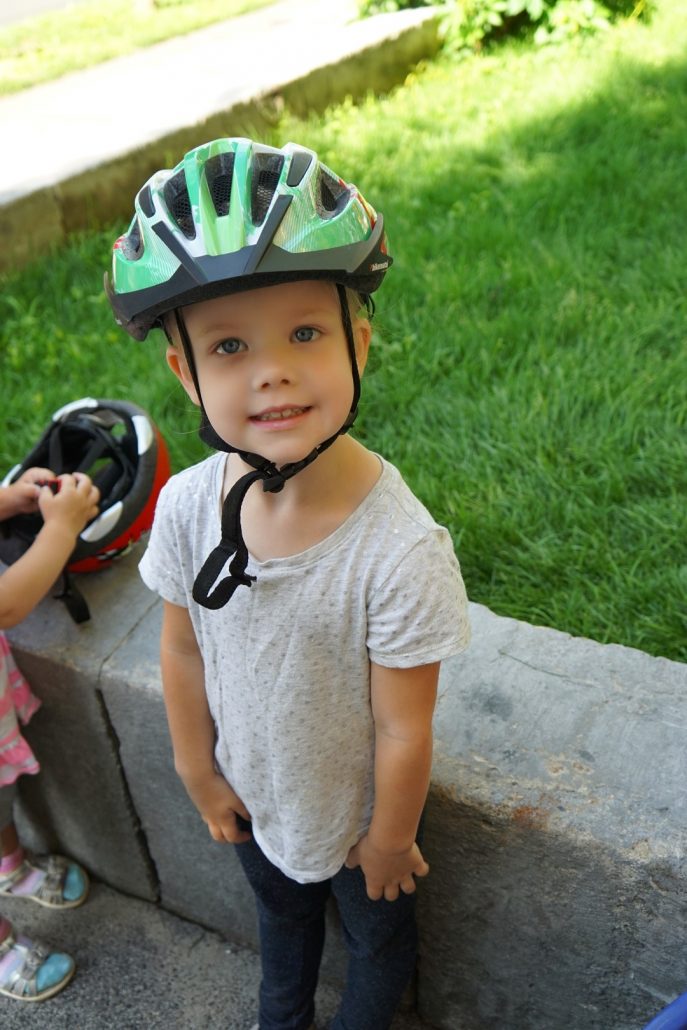 Success! It was a blast. The kids had a great time, and I vowed to buy bikes for the whole family when we get back to normal life. Vienna feels like it was made for biking. They have tons of bike trails and parks. We nicknamed Vienna ‘the most liveable city.’ Of all the cities that we visited, this one seemed the most family friendly with lots of outdoor parks, activities, and events that everyone would enjoy. We passed by a water park/splash pad that made us seriously regret not bringing our swimsuits on our bike ride.

We were biking along this nice trail when we passed a water skier being pulled along with this pulley system. I have no idea if it is open to the public or if it’s for training, but we sat and watched this guy practice flips and jumps. A couple times he fell and the pulley went on without him, but all you have to do is wait for it to come back around and grab it again. Seemed like such a fun idea! If only I knew how to waterski… 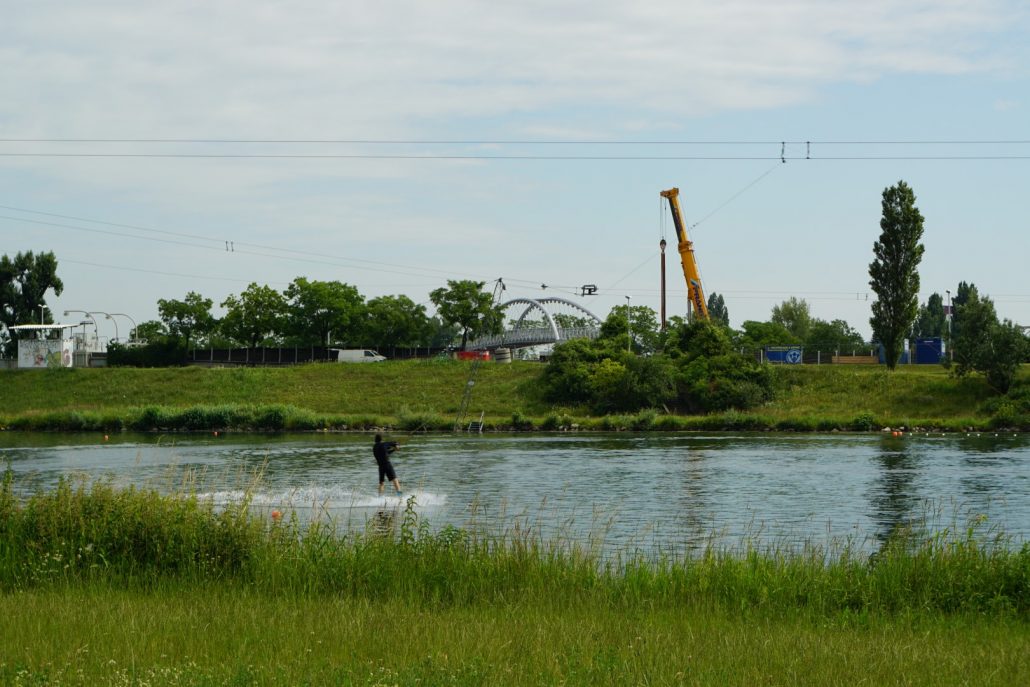 To keep the kids from getting too antsy after being buckled in their seat for over an hour, we stopped at a park and let them run around. I took the opportunity to practice my German with a little boy, but he just stared at me like I was speaking French. Perhaps I was saying the wrong words, totally wrong on the pronunciation, or he heard me speaking English to the girls, but he looked at me like I was very strange. 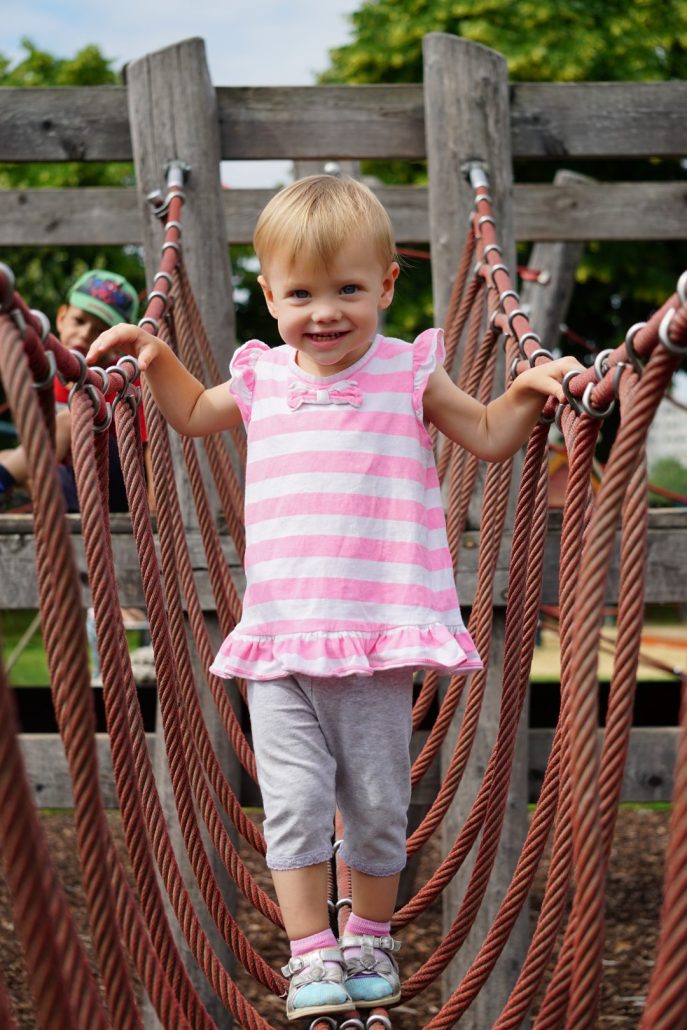 Sometimes arranging transportation to go outside the city for an excursion can be difficult. We really wanted to visit a concentration camp while we were in Europe and Mauthausen was about an hour and a half away. There was no direct train to the concentration camp, and once you made it to the nearest train station, you then had to catch a taxi the rest of the way. It looked like it would be a long and expensive day trip. Then I looked at car rentals, which seemed like a much better way to get there. It was cheaper than buying three adult train tickets, and we could save time and drive straight to the concentration camp. Or so I thought. Cheaper, maybe. Less hassle? Not really. It seems simple to just go get a rental car and hop in it and go. But what about the carseats? Rent them? We would have to rent two and that makes it almost more expensive than the train tickets. Buy one? More expensive than renting and then what do we do with it?

In the end, our airbnb host had a friend who lent us a carseat and we rented the other. Chris went to pick up the rental car while I went to grab the carseat. Then Chris came and picked me up, and then we finally went back to pick up Courtney and the girls. Whew! See what I mean? Was that any easier than taking 2 trains and a taxi? Maybe.

We made it to Mauthausen Concentration Camp. It is definitely a solemn place full of moments of reflection. It didn’t feel appropriate to smile for a picture in a place like this, but then we didn’t want to frown or look too serious, so consequently we ended up with some weird expressions on our faces. We were still trying to figure out what kind of expression to have when Chris snapped the photo. 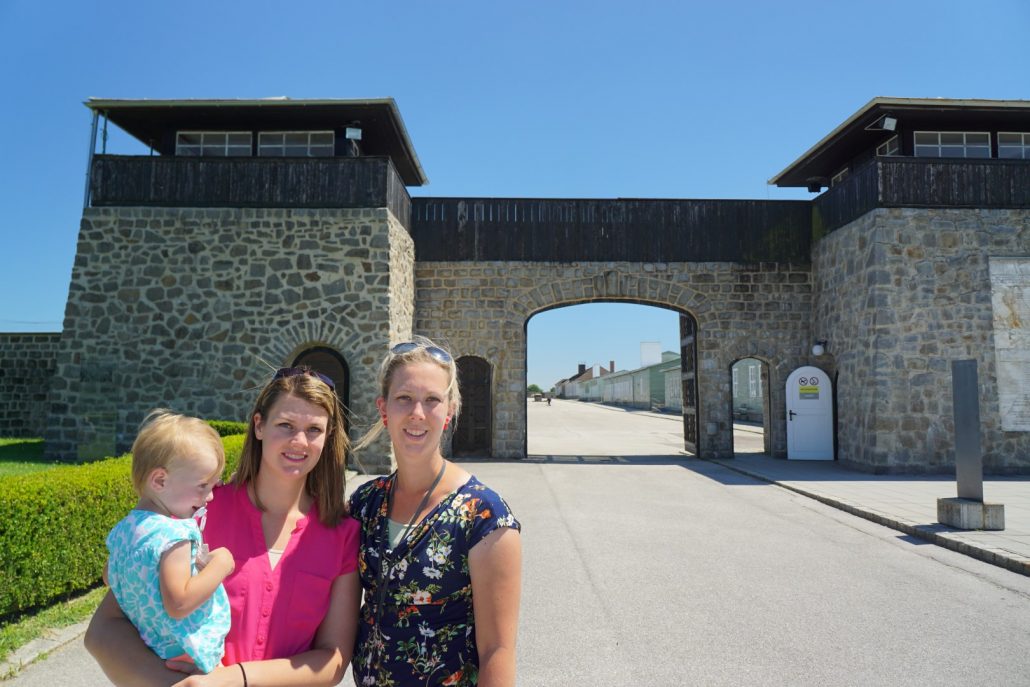 We rented the audio guide and took the tour around the concentration camp. I went through a phase in Junior High where I read every book about the Holocaust that I could get my hands on. I’ve imagined the concentration camps in my mind many, many times. It was very humbling to stand here and now imagine the victims standing here, right in this very spot, waiting for roll call. Hours and hours of standing sometimes. They stood here in the heat and in the freezing cold. Waiting. 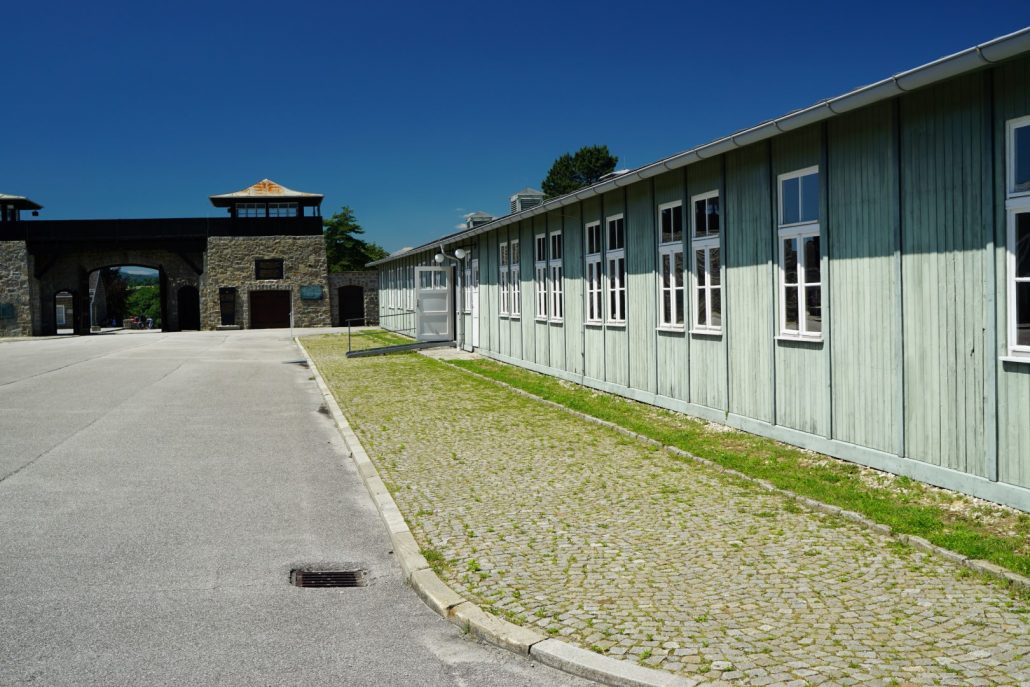 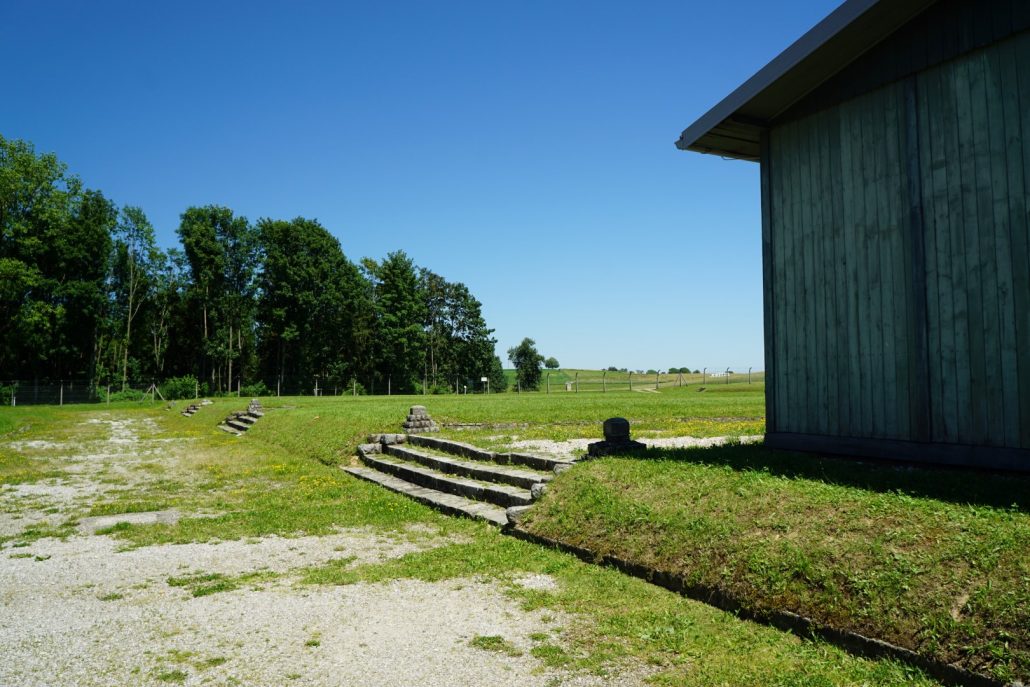 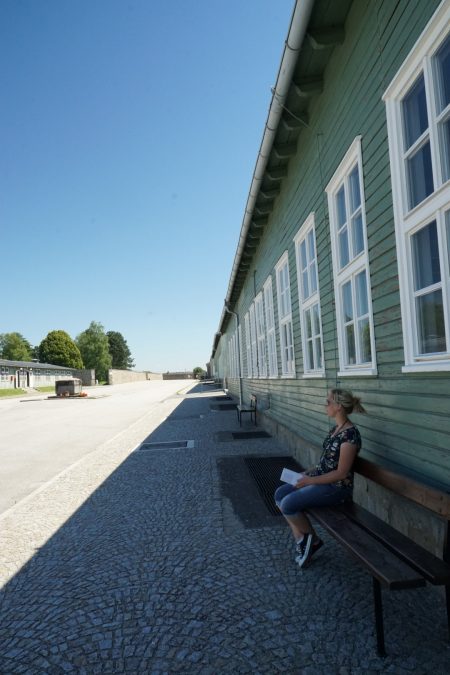 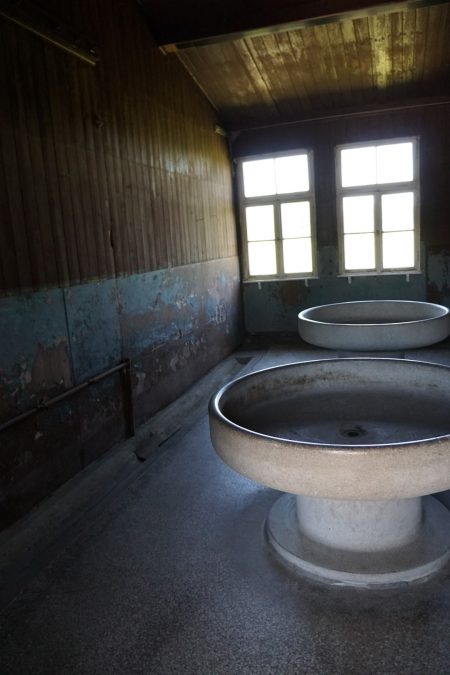 Barracks that were packed with people way beyond capacity. 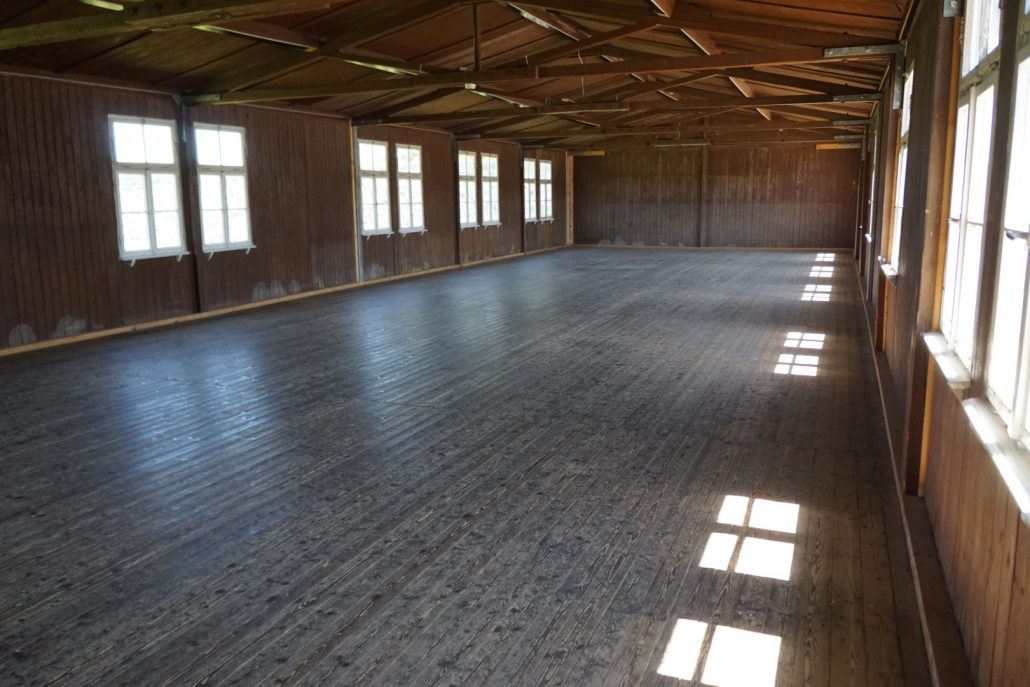 There was an area of the concentration camp that was turned into a cemetery and memorial. My kids couldn’t even begin to comprehend what happened here, and I wasn’t even going to try to explain anything besides a lesson on being kind to everyone. So they went running through the cemetery laughing and playing. I wasn’t sure if I should stop them and tell them to be quiet or if it was ok that they were just being innocent kids. I’d like to think that the people who died here, tragic as it was, would get just as much joy out of seeing children running, playing, and laughing as I do. So I didn’t stop them. 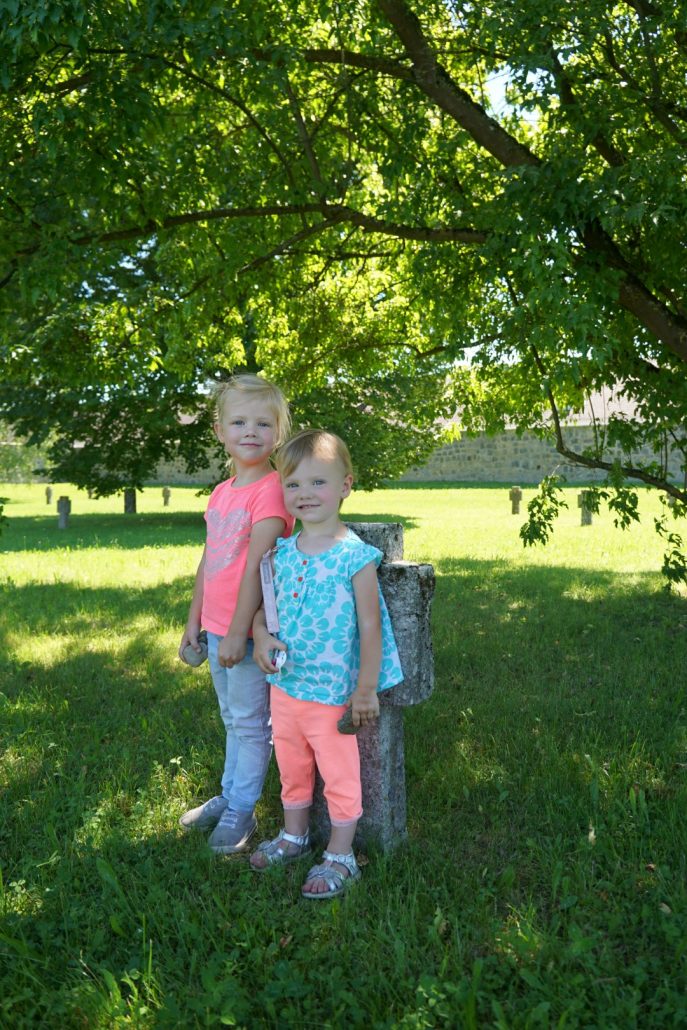 Just beyond the cemetery was a section that had been reserved for the very sick. It was quarantined from the rest of the concentration camp and surrounded on all sides with a tall cinder-brick wall. Out of curiosity, my sister jumped and reached to catch hold of the top of the wall. Well…. she reached it and the top of the wall was really rough. It scraped up her hands really good. She was bleeding in multiple places, and she definitely needed a few bandaids. I don’t know if it was constructed like that on purpose, or if it just happened over time, but no one would escape over the wall unscathed. 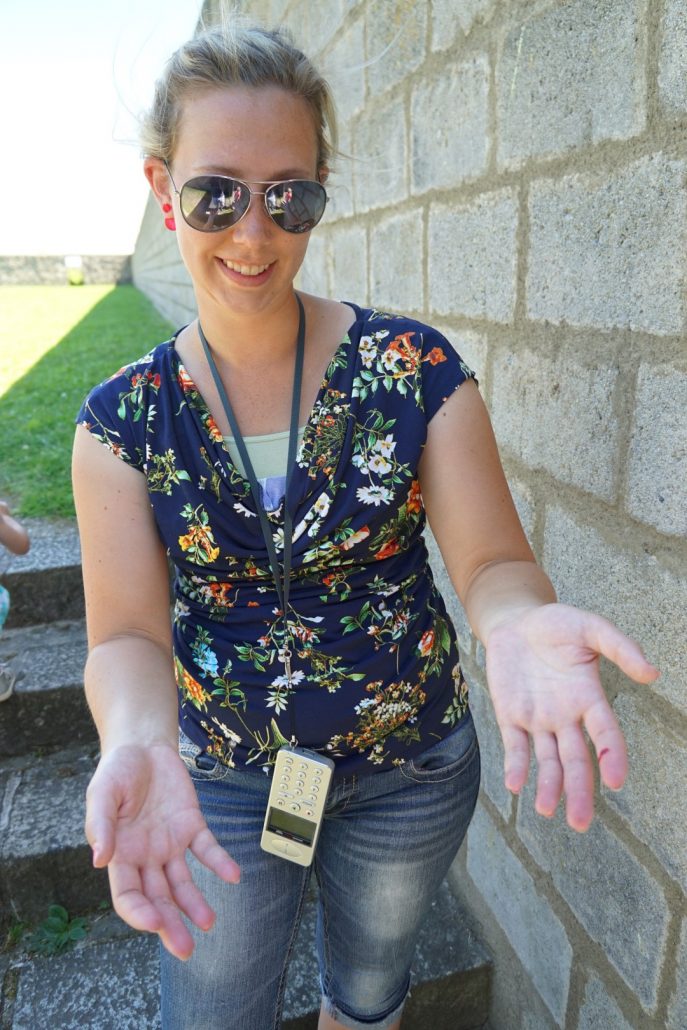 Pictures and memorabilia of those who died here. Sometimes, you can’t even fathom what went on here. It’s just so horrifying. We walked past the crematorium, and I just stood there for a few minutes reflecting in complete disbelief at what transpired here. Let’s all be much nicer to each other. Love your neighbor. Treat them with respect. 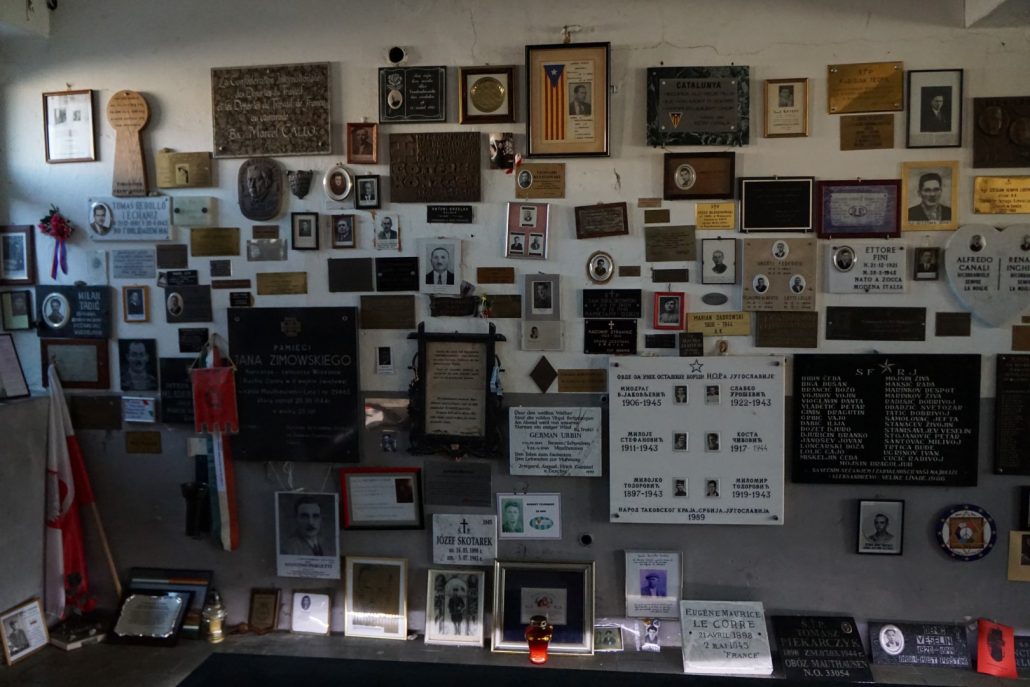 Viennese food. Not my favorite. Wienerschnitzel: thin veal coated in breadcrumbs and pan fried. It’s a classic Viennese dish. Chris enjoys those a lot, but I can easily pass (it was nice that the waffle place was across the street from an inexpensive schnitzel place. Win-win.). Bratwurst: a classy hot dog. I’ve never been much of a hot dog/bratwurst kind of gal, so while the bratwurst I tried here was probably amazing on a scale of bratwurst deliciousness, I thought it was just alright. I tried it two or three times, but that’s mostly because it was the cheapest and easiest food to eat on the go for lunch. Goulash (pictured below on the right): thick tomato-y stew with chunks of beef served with a side of bread, potatoes, or dumplings. It was a little strange at first, but I grew to really like it. I may be drooling a little as I write this… 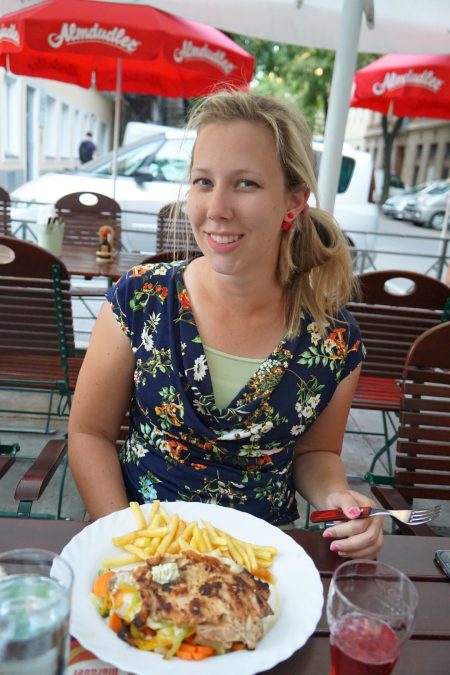 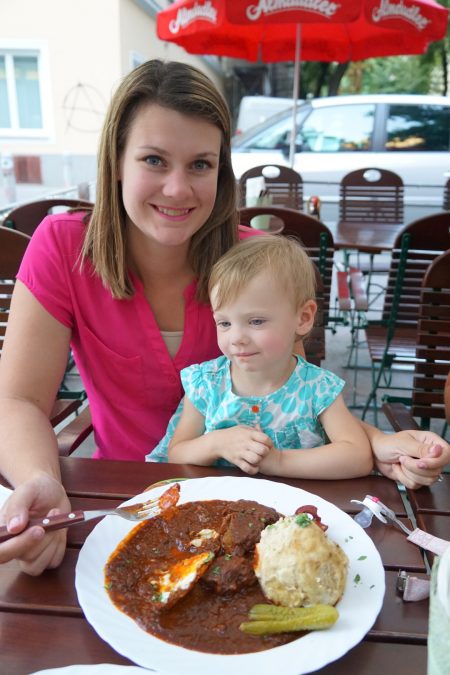 You can’t leave Vienna without visiting the Schoenbrunn Palace. We toured the silver collection as well as the Sisi Museum and the Palace. The silver collection was intriguing, but it went on and on and on. I can’t even believe how many sets of silver and porcelain the royalty have. It also makes me think about how this idea of passing along heirlooms has perhaps died off a bit for our generation. Things are more consumable instead of being built to last through to the next generation. We tend to throw things away and buy a new one rather than repair them. When I picked out a set of dishes when I got married, I didn’t really count on it lasting more than 5-10 years before I would need to or want to get a new set. But my parents still have a lot of the dishes, appliances, crystal, etc. that they received as wedding gifts. 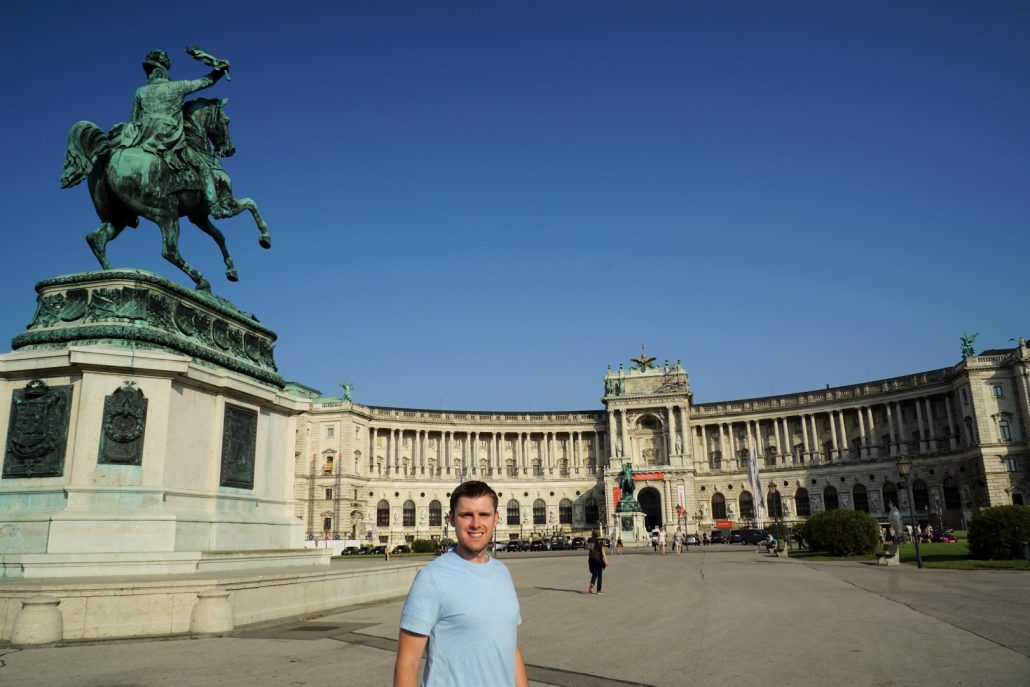 As we were leaving the Palace grounds, they were closing it down for some special event. We had to walk all the way around to the side entrance because they had the front entrance all decked out and waiting to receive people. We tried to figure out what kind of event it was, but all we saw were horse drawn carriages, fancy cars, and tuxedos. 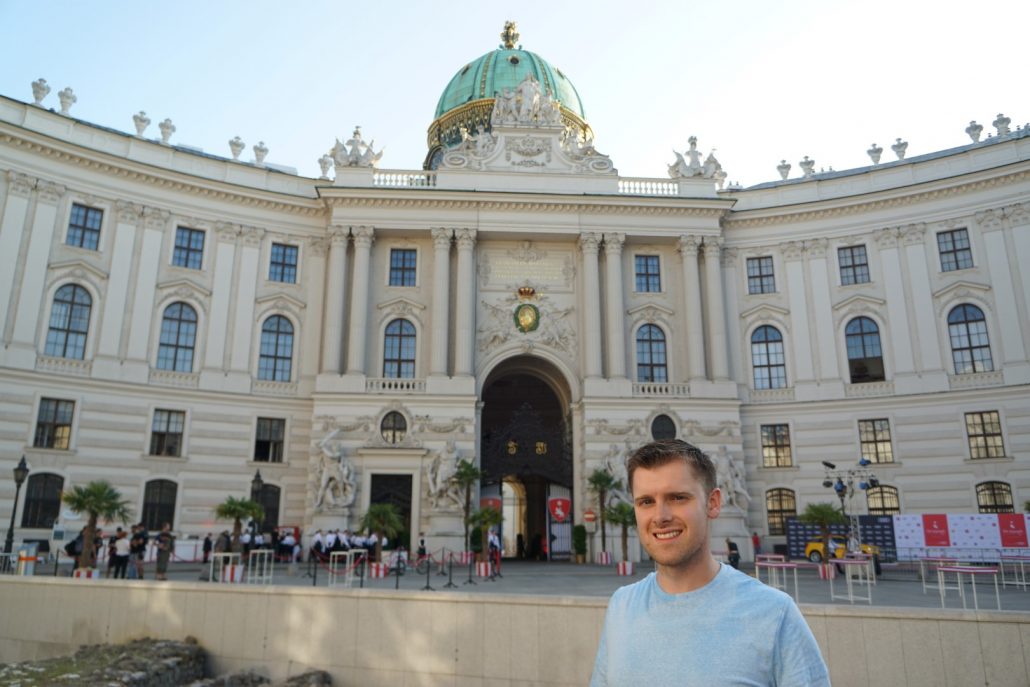 On our last day we went to the Naschmarkt. We strolled up and down the stalls and sampled olives, falafels, cheese, and more. We ate lunch and did a little souvenir shopping as well. In the picture below of Charlotte and Lucy, they were getting a little worn out by the end of the day.

These two sure love each other. It’s so fun to watch them interact and play together. 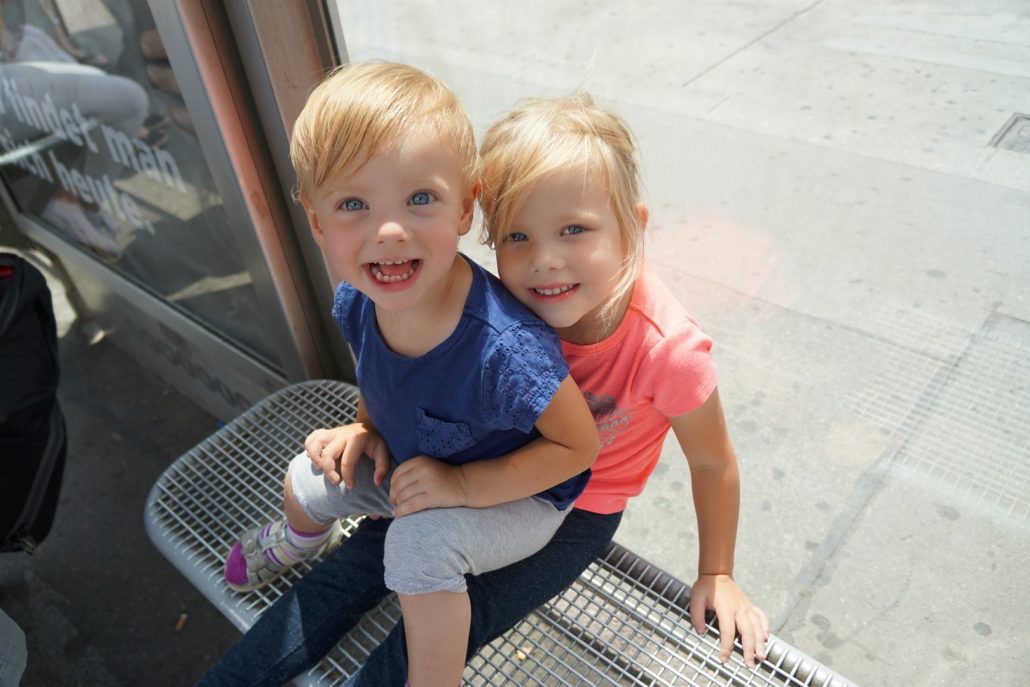