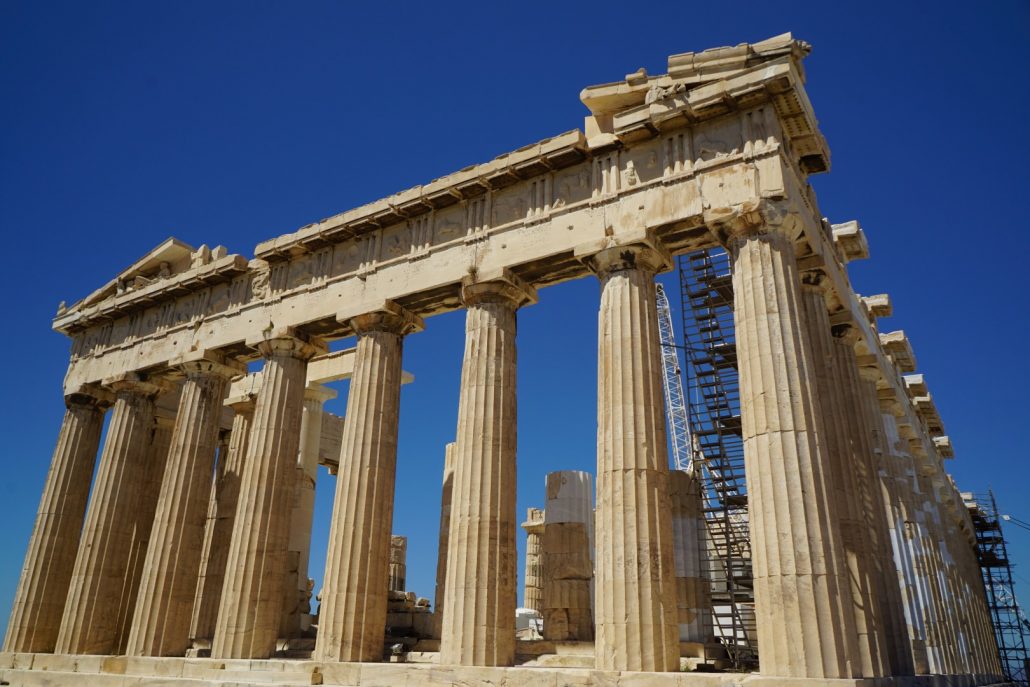 I’m not too proud to admit when I’m wrong. Chris is the one who insisted we visit Athens during our trip. I was opposed to it, but mostly because of geography. Rome was as close as we were going to get to Athens and it’s still another 800 miles away. It was going to take a bit of extra time and money to get there. But, although I was against it at first, I am so glad we went. It’s probably in the top four, maybe top three, of my favorite stops in Europe.

We were there in mid-June (I know, my blog is waaay behind) and it was hot outside. Apparently, it was a bit warm for mid-June, but just a few weeks later that 102 degree heat would be normal temperatures. I planned all of our sight-seeing with the heat in mind. We were out early, lunch and siesta in our air conditioned apartment during the heat of the day, and then we had an early evening outing. Our first morning was spent hiking and exploring the Parthenon (PAR-thenon, the one in Greece).

Since everything is a bit cheaper in Greece right now (I assume due to their financial difficulties), I sprang for a (relatively) more expensive apartment which was very well located (it probably also helped that I was booking 8 months in advance). The Parthenon, most of the sight-seeing, and lots of really delicious food was just a short walk away. 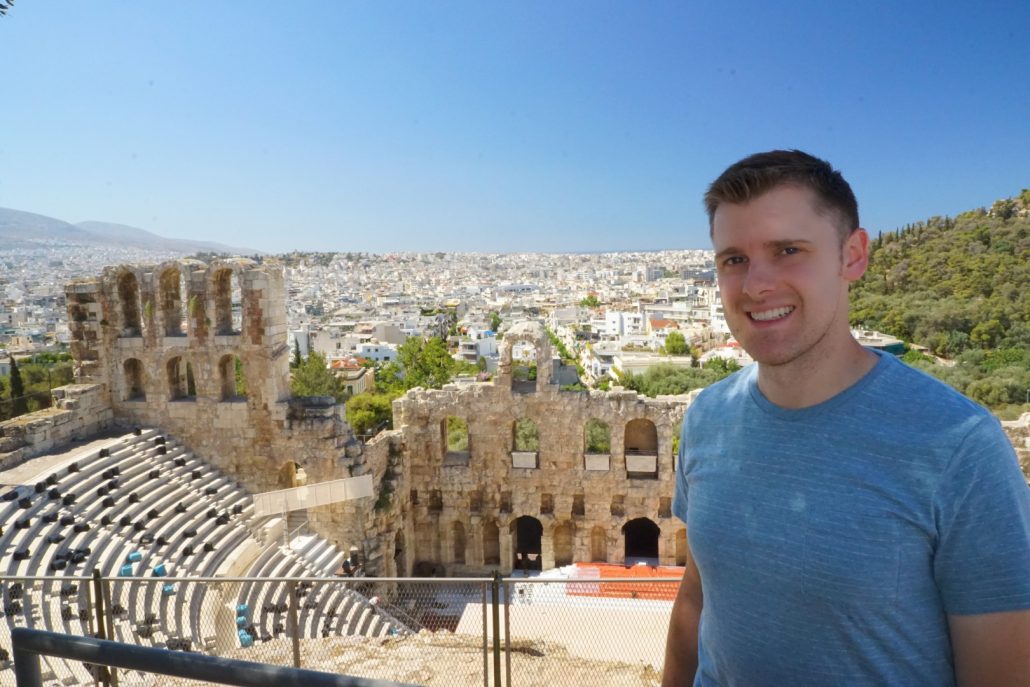 Taxis in Greece are wonderfully inexpensive, so we were thrilled to take a break from public transportation (which is quite the challenge with two toddlers and a double stroller). On our ride from the airport to our apartment, our taxi driver was telling us a lot about Greece and Athens. He has lived in Athens his whole life. I’m not going to lie, I thought about this clip from My Big Fat Greek Wedding several times while we rode around in taxis. Except, instead of learning about Greek words while we drove around in taxis, they told us all about Greek history and politics (there are a lot of people angry at the government in Greece, and the taxi drivers expressed their frustrations with a passion). Athens is a huge, sprawling city and over 27% of the population of Greece lives in Athens. 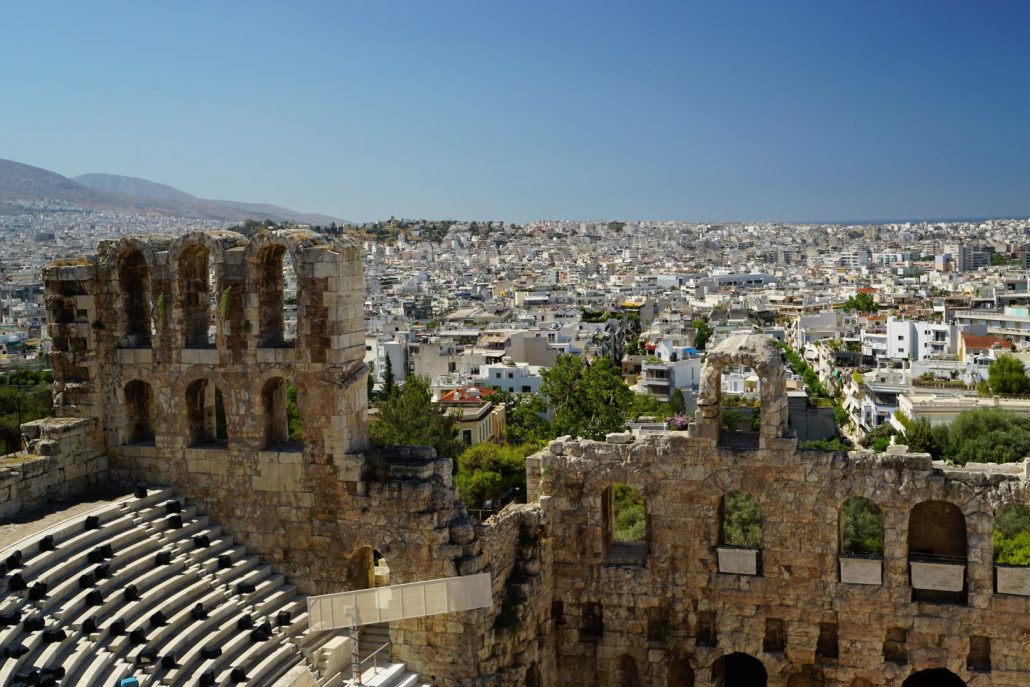 We got a fairly early start the next morning, but after walking to the entrance, buying tickets, bathroom stop, etc. it was already pretty warm, and we hadn’t even started our hike up to the Parthenon yet. Charlotte is the oldest, but she’s quite the wimp when it comes to walking or hiking. She’s usually the one riding in the stroller, and after walking short distances she complains, “My knees can’t walk anymore!” And as you can see, a few minutes into our hike Charlotte is getting a ride and Lucy is toughing it out. 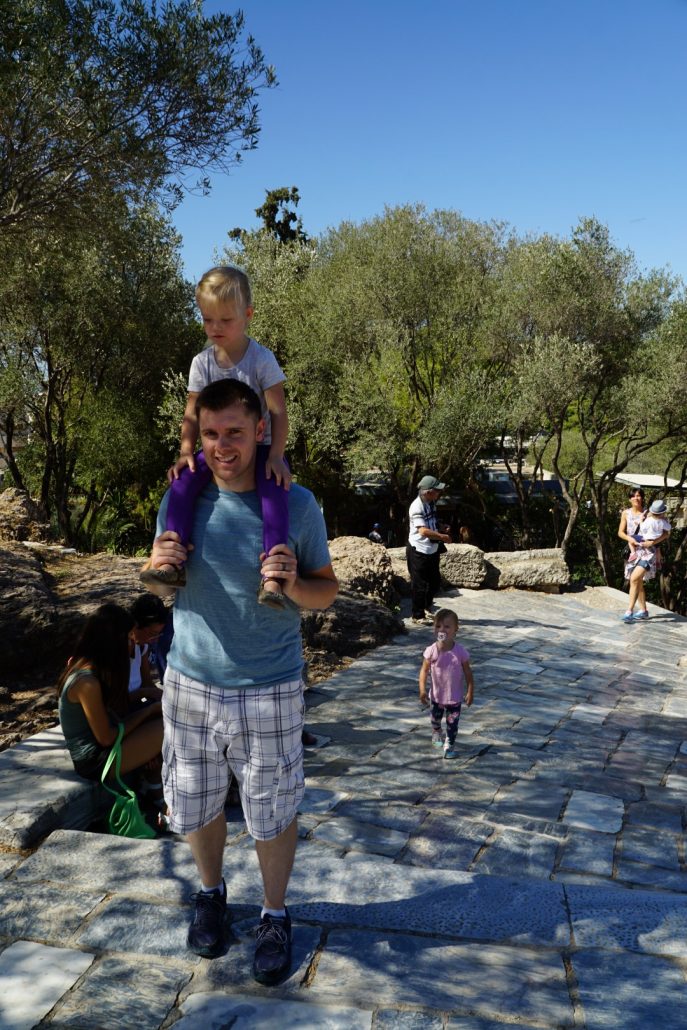 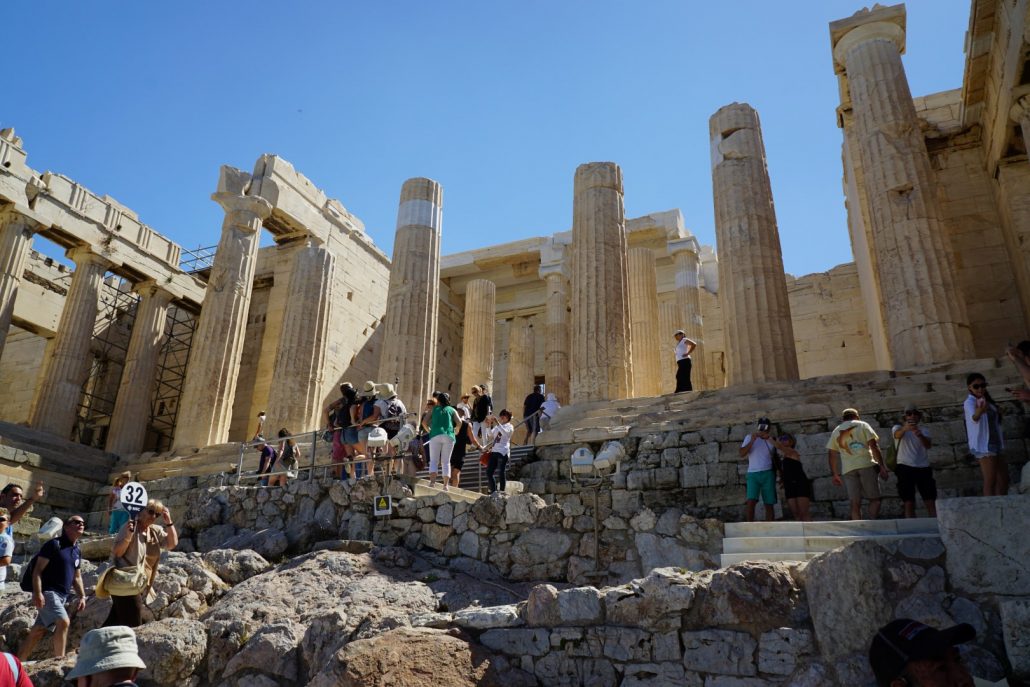 The Parthenon will have scaffolding on it for many, many more years while they complete their restoration work. Apparently, many of the statues were fairly well preserved until the pollution from cars and industrial age severely eroded many of them. I’ll point out an example later… 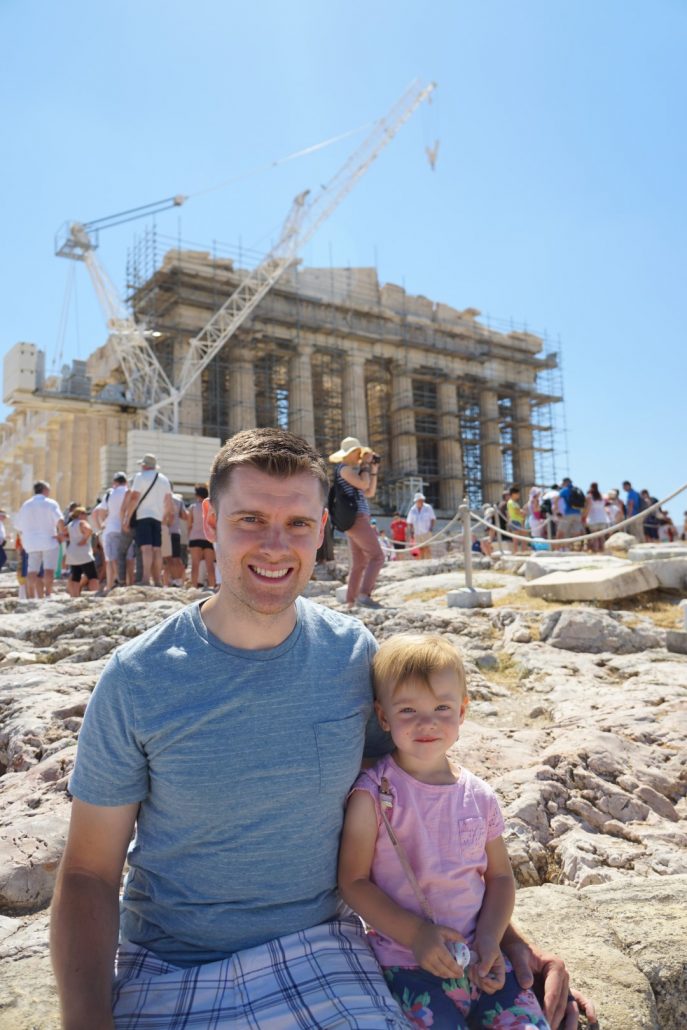 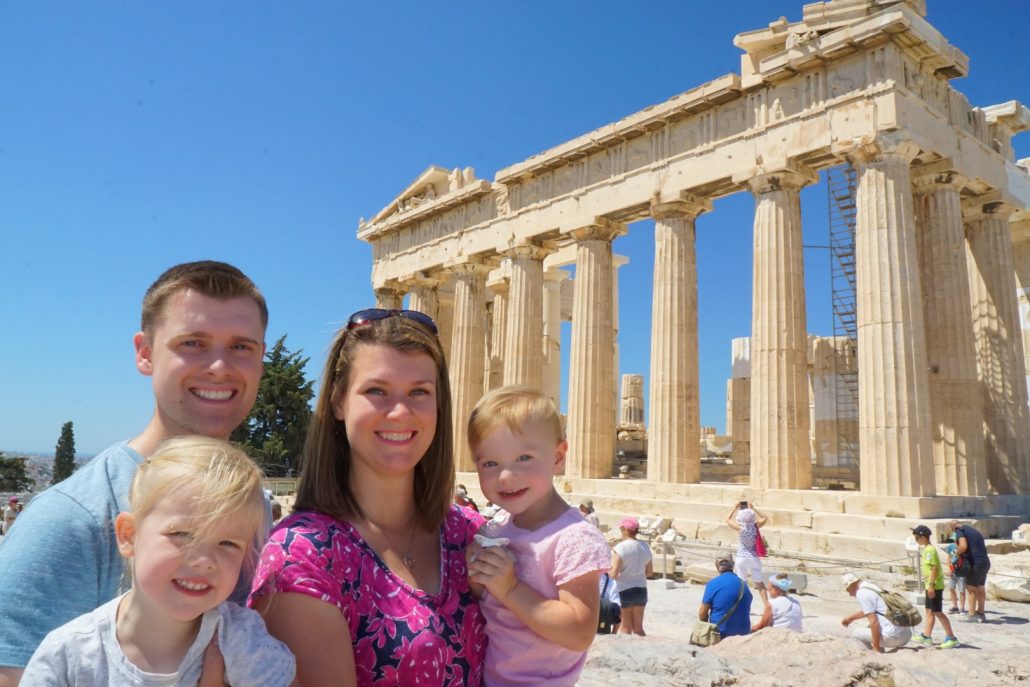 After many failed attempts at a selfie, we finally gave up and just asked a nice person to take our picture. Much better. We’re not that good at selfies. (We later realized that our camera just doesn’t have a favorable focal length for selfies — it’s too zoomed in. Chris keeps trying to use it as an excuse to buy another lens). 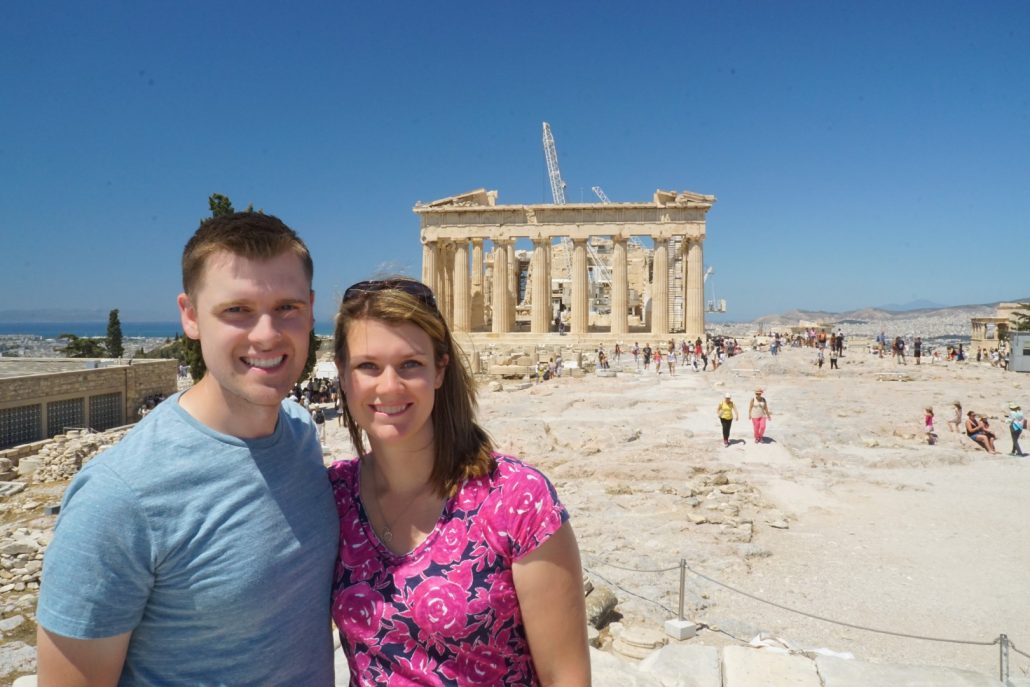 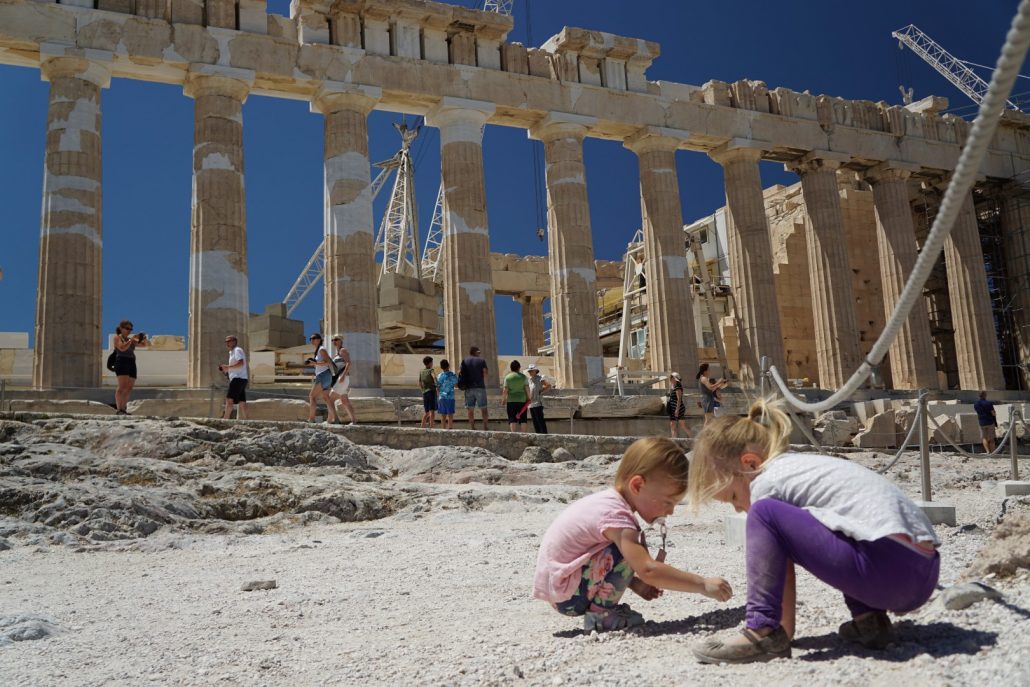 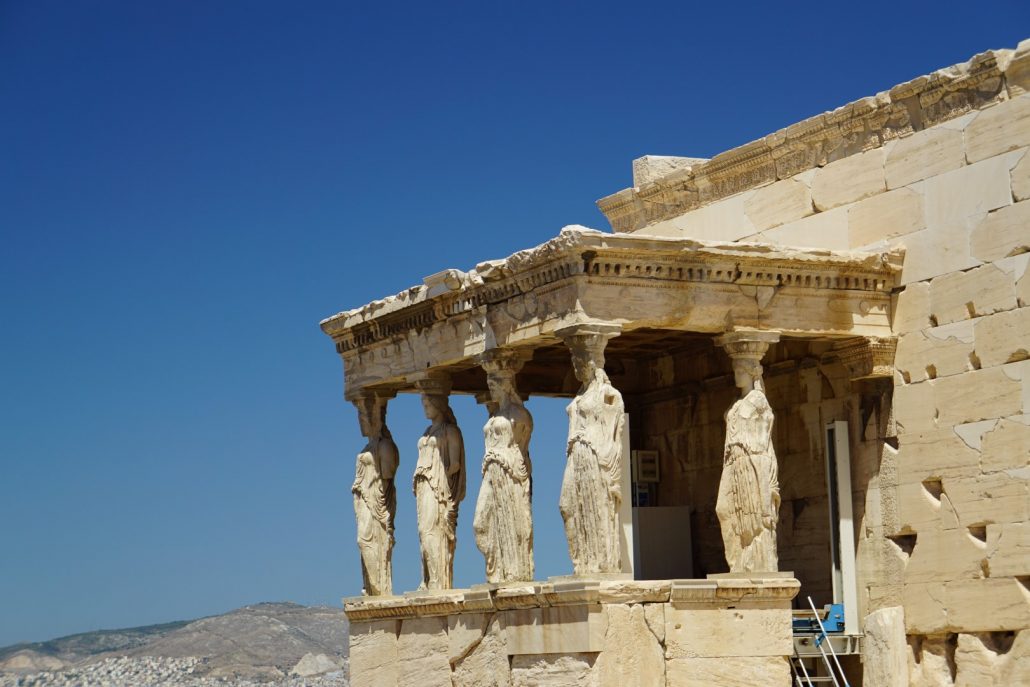 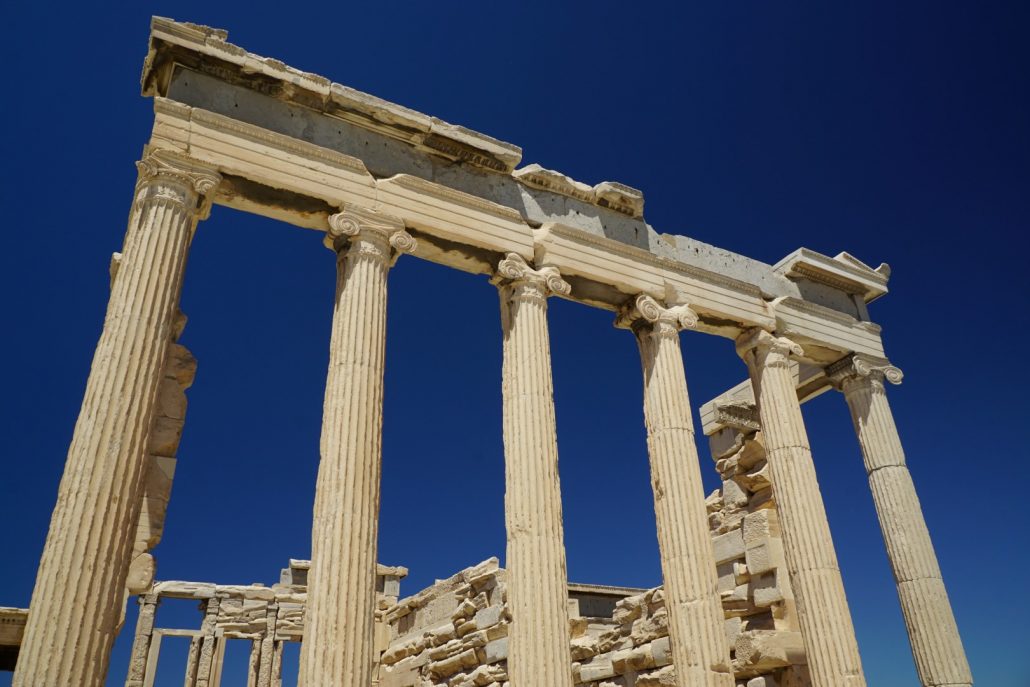 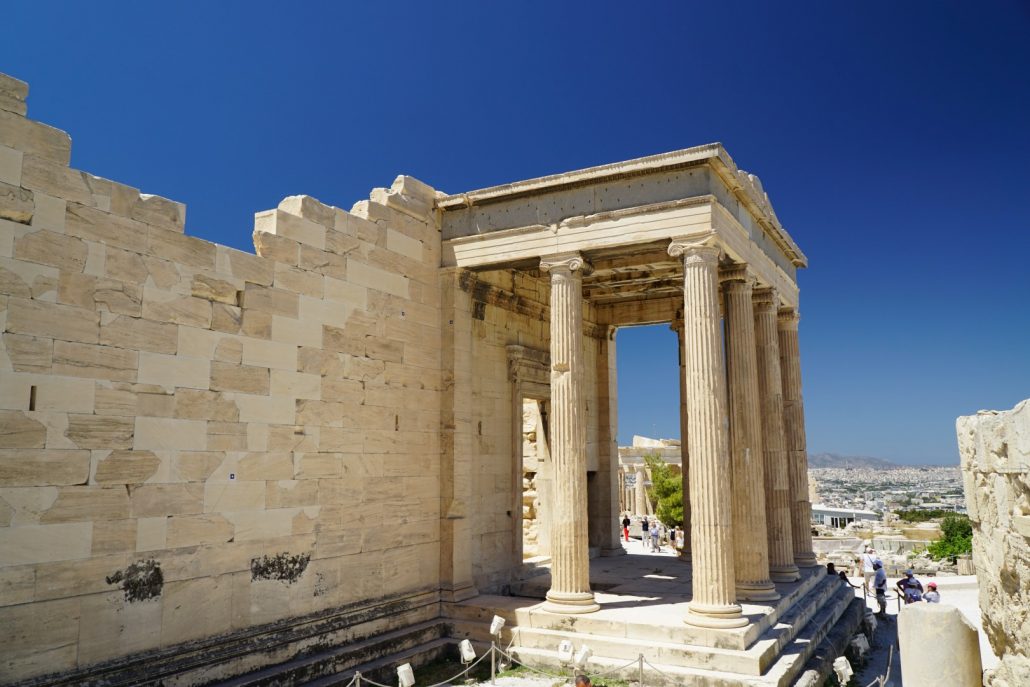 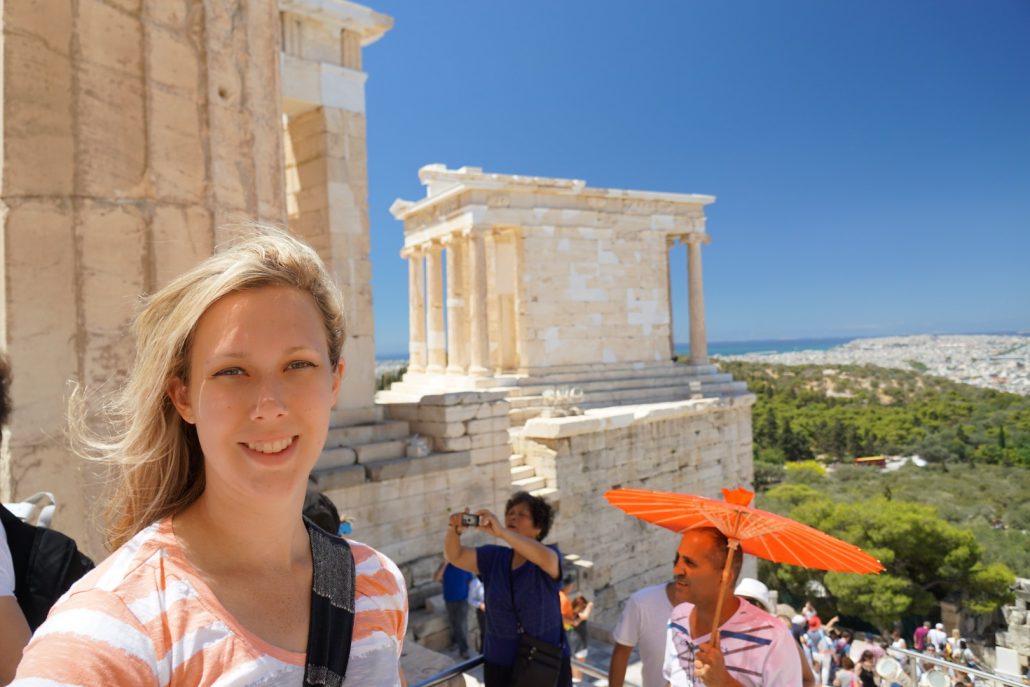 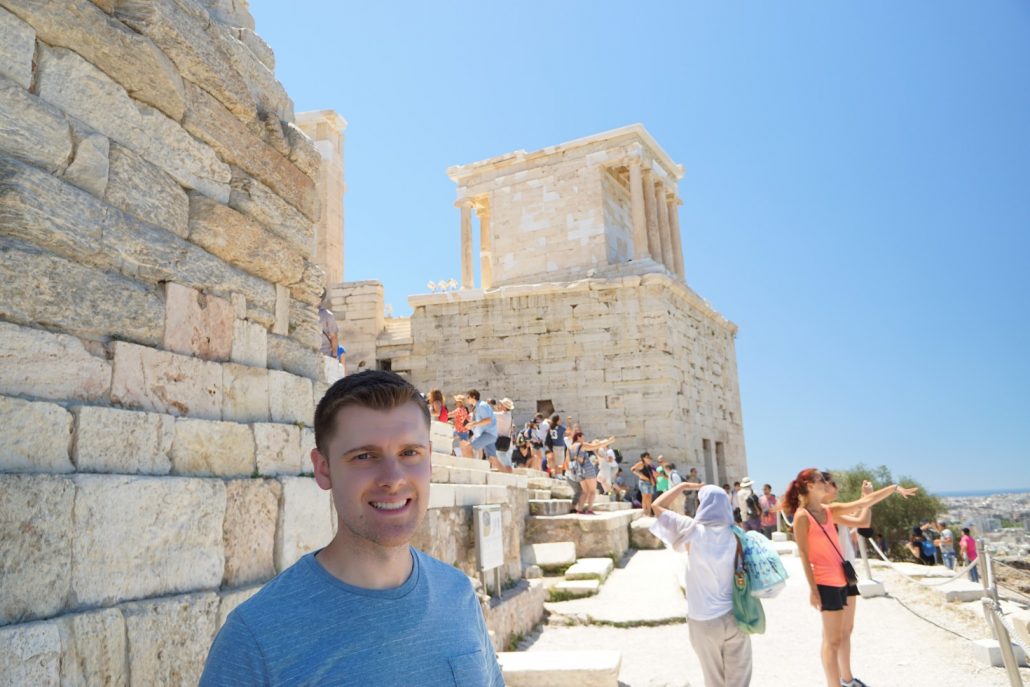 Greece has built this new Acropolis Museum just down the hill from the Acropolis. I thought the museum was very cool and well laid out. A lot of the items in the museum (and a lot of the marbles on the Parthenon) are actually replicas because in the early 1800s Lord Elgin took a lot of the originals back with him to England (now in the British Museum). Greece is hoping that this nice, new museum will persuade England to return the originals back to Greece.

When Athens became industrialized, the air pollutants damaged the statues. Their facial features began to dissolve, which is why their face now looks so worn. I thought it was a little sad that these statues are 2500 years old and in just the last two hundred years they suffered so much damage. But they had extensive restoration done just a few years ago, and they look much better! 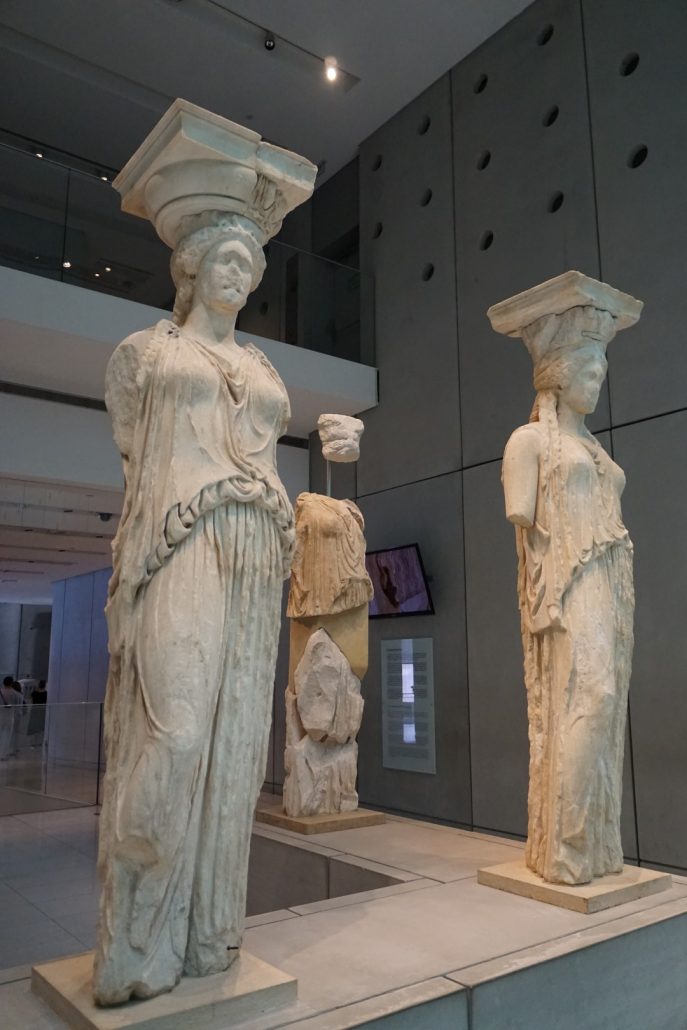 They had this really cool lego replica of the Acropolis. So detailed! 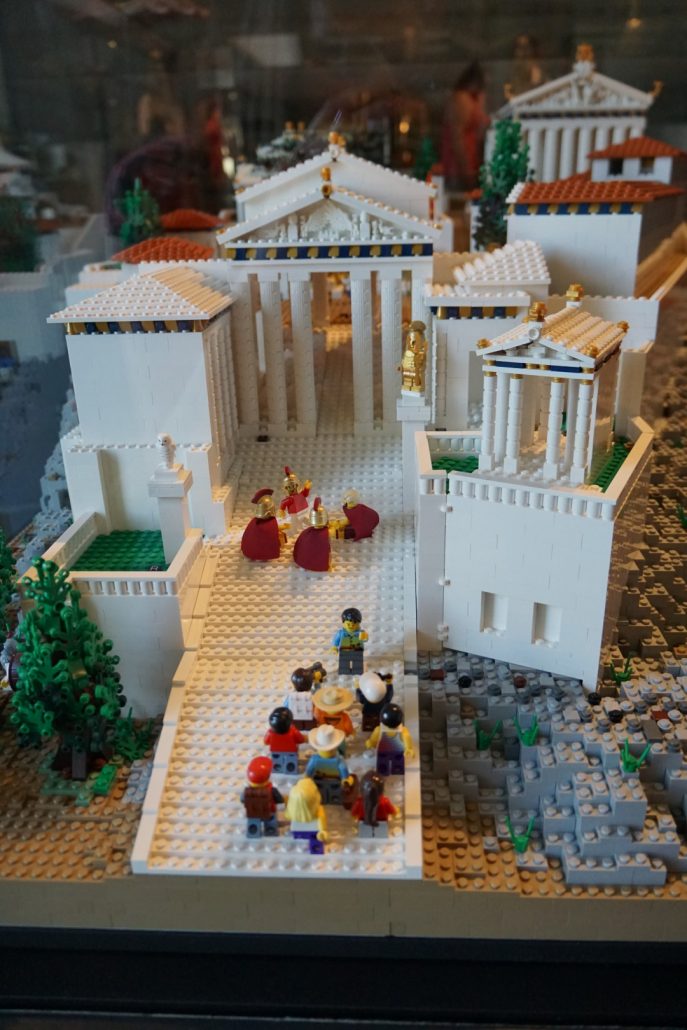 I never know what kind of pose she is going to strike when I ask her to smile for the camera.

From the cafe at the museum they have a great view of the Acropolis! 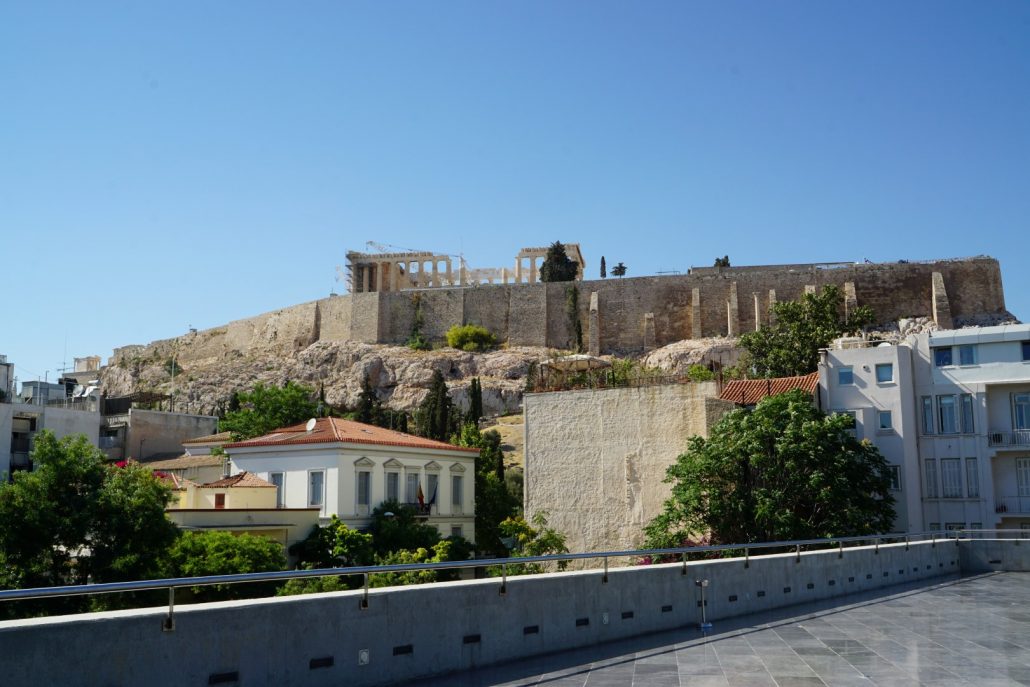 On the way home we made a pit stop at the Panathenaic Stadium, where they held the first modern-day Olympics in 1896. They were preparing for a Greek concert in a few days, so we weren’t allowed in but it’s still quite a grand sight. 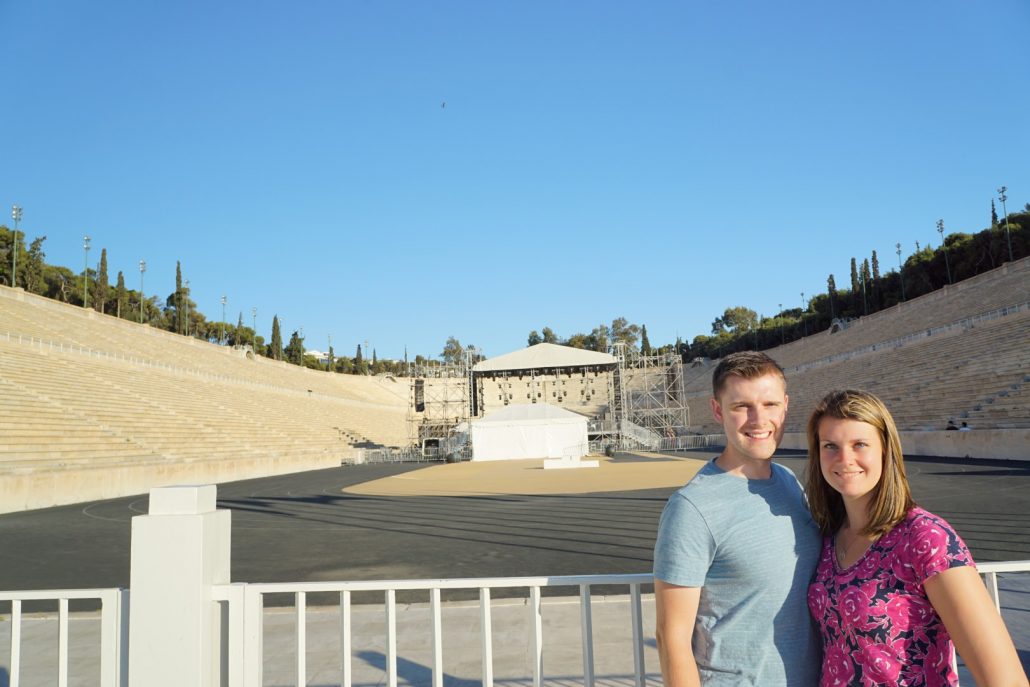 One of my favorite activities in Athens: outdoor movie with a view of the Acropolis! It was so fun to take an evening walk, watch the last bit of sunset, and enjoy an outdoor movie. And the popcorn was only a dollar! Who could pass up a deal like that? The best part was that the movie was in English with Greek subtitles.