An Art Filled Day in Rome 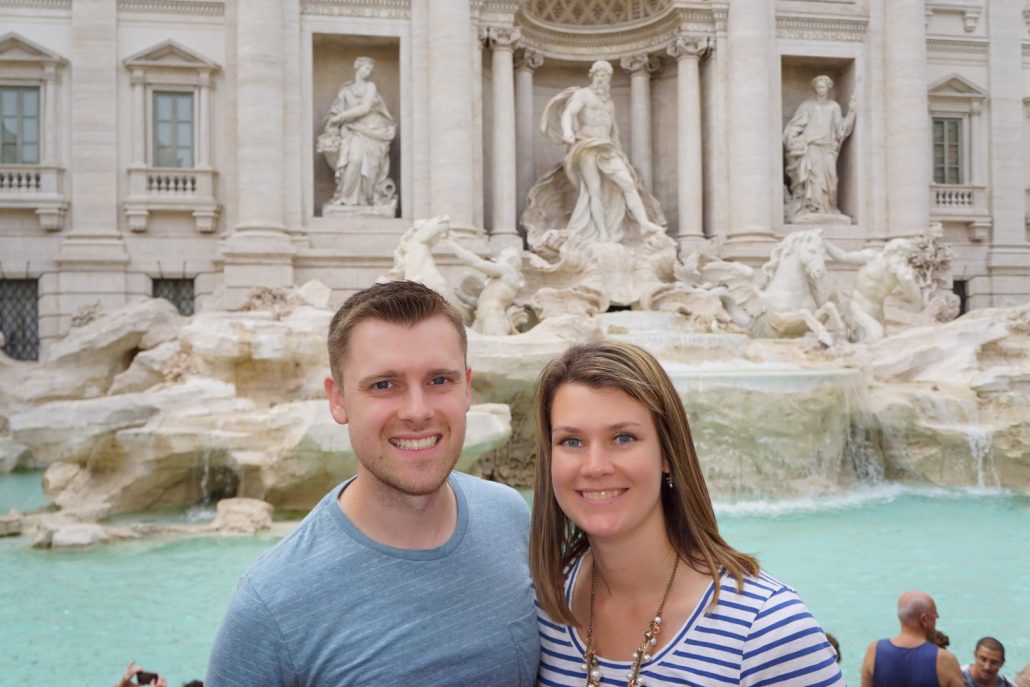 Our art filled day started at the Borghese Gallery. This art gallery operates a little differently than other art galleries. You must buy your tickets in advance (during the summer they are almost always sold out) and your ticket is for a two hour window. Everyone at the gallery has the same two hour time slot, so when the time is nearly up they announce that everyone must make their way to the exit. As you are exiting you see everyone with the next two-hour slot lined up ready to enter the gallery. So if you want the full two hours, you have to be on time. 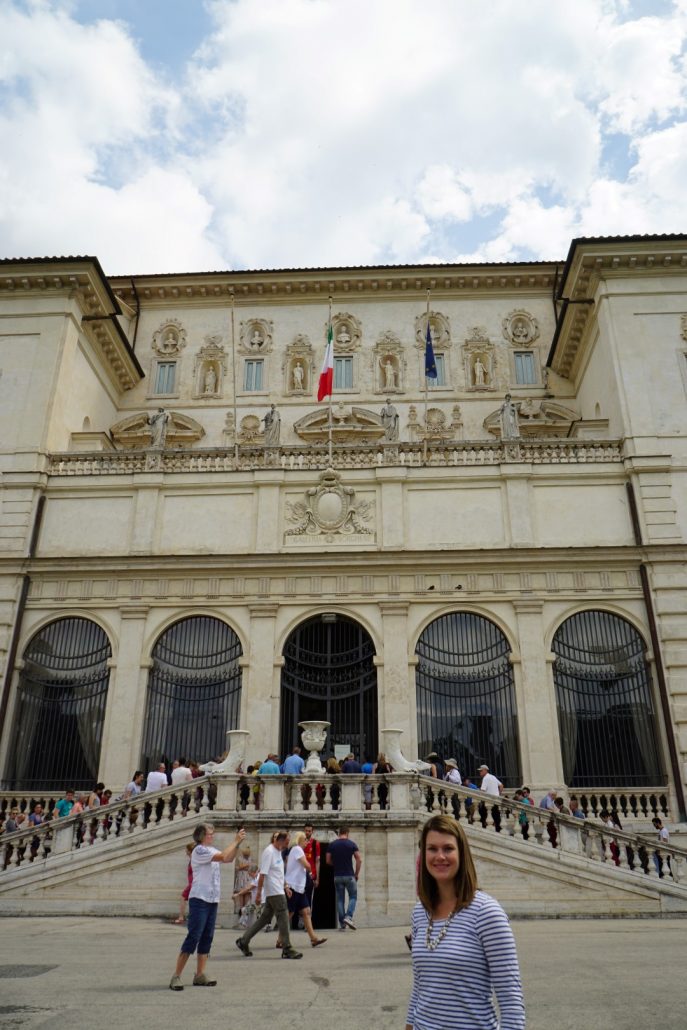 Apparently, I’m a fan of the sculptor Bernini. I didn’t know this until I was writing this post and realized that every sculpture I was going to highlight were all done by Bernini. This is a sculpture of David (as in David and Goliath). One of the reasons I like this sculpture is because it shows a different side of David, the fierce David who has to fight. 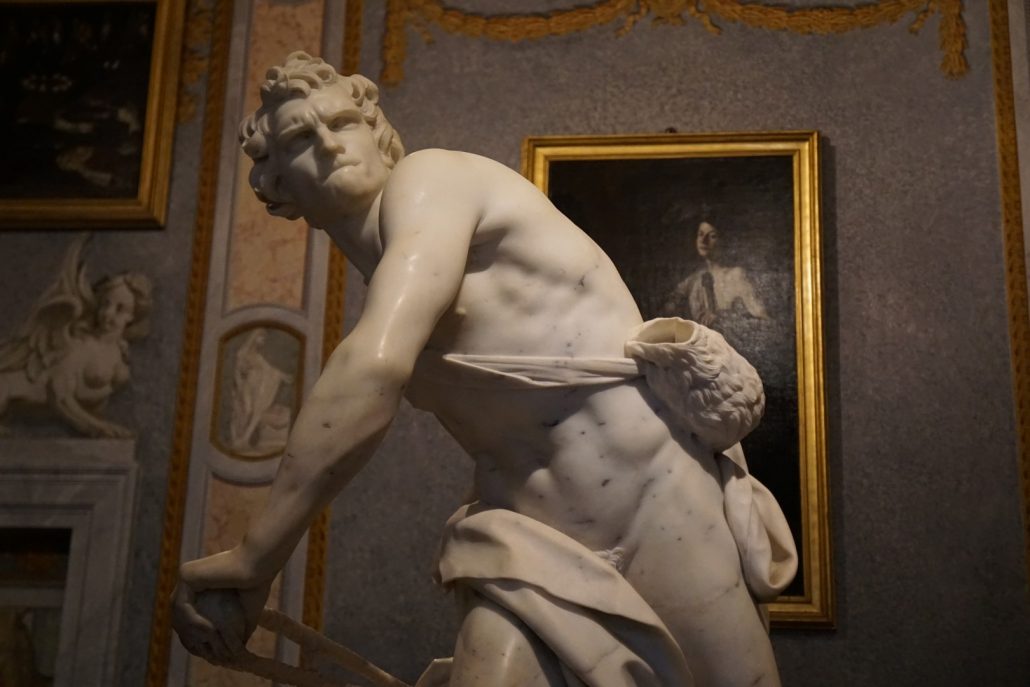 This sculpture is called Apollo and Daphne. There’s a whole long story associated with these two, but I’ll summarize: he’s chasing her, she doesn’t want him, so she asks her father for help and her father turns her into a tree. If you look at the sculpture, he sculpted the moment when she starts changing into a tree. Her fingers are sprouting leaves, her body is being changed to bark, and her toes are growing roots. It’s incredible. Those leaves coming from her fingers look so delicate you forget it was carved from stone! 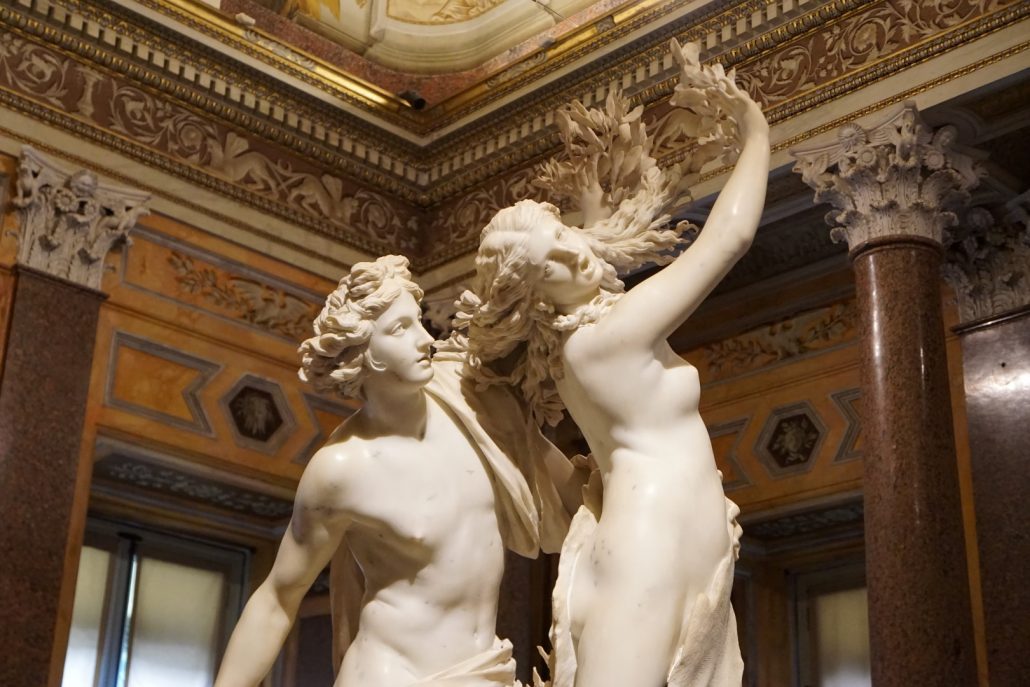 Here’s another Bernini. If you look closely at his hand on her thigh, you can see the pressure of his fingers on her skin. This is carved from stone people. Stone! Amazing. 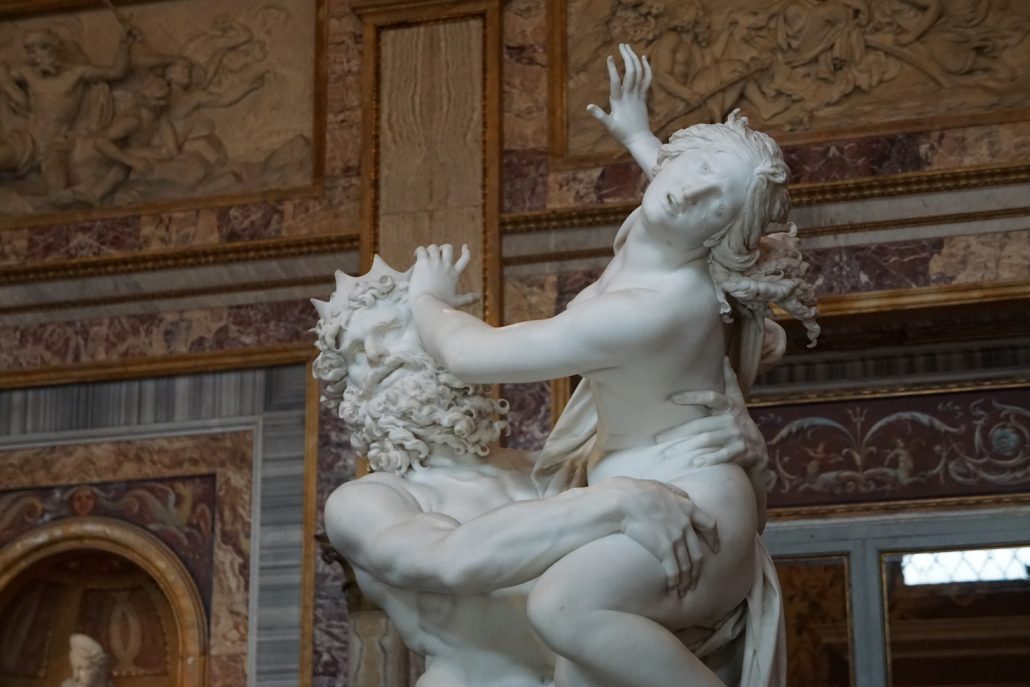 In the afternoon we took another self-guided walking tour around Rome to see a few of the highlights.

When we arrived at the Trevi Fountain, we almost turned around and just walked away. It was SO crowded. We weren’t sure we were going to be able to get the stroller anywhere near the fountain. I have no idea why there were so many people there. There must have been multiple tour buses that all stopped there at the same time. After taking a few awkward photos with a terrible view, a tiny spot opened up near the front and we dove for it. It was quite the sight with hundreds of people jammed as close to the fountain as possible with dozens of selfie sticks up in the air trying to get the best shot. I wished we’d taken a picture of the crowd too.

We continued on to the Spanish Steps (which were sadly closed off) and sat in a nice, nearby square to enjoy the evening and eat some gelato. The girls begged to feed the pigeons, so I found a few crackers for them. They love feeding the pigeons, and then Chris loves to scare them off.

We were snapping away with the camera and suddenly Charlotte starts throwing in some poses like this one! I don’t know where she got this idea from. 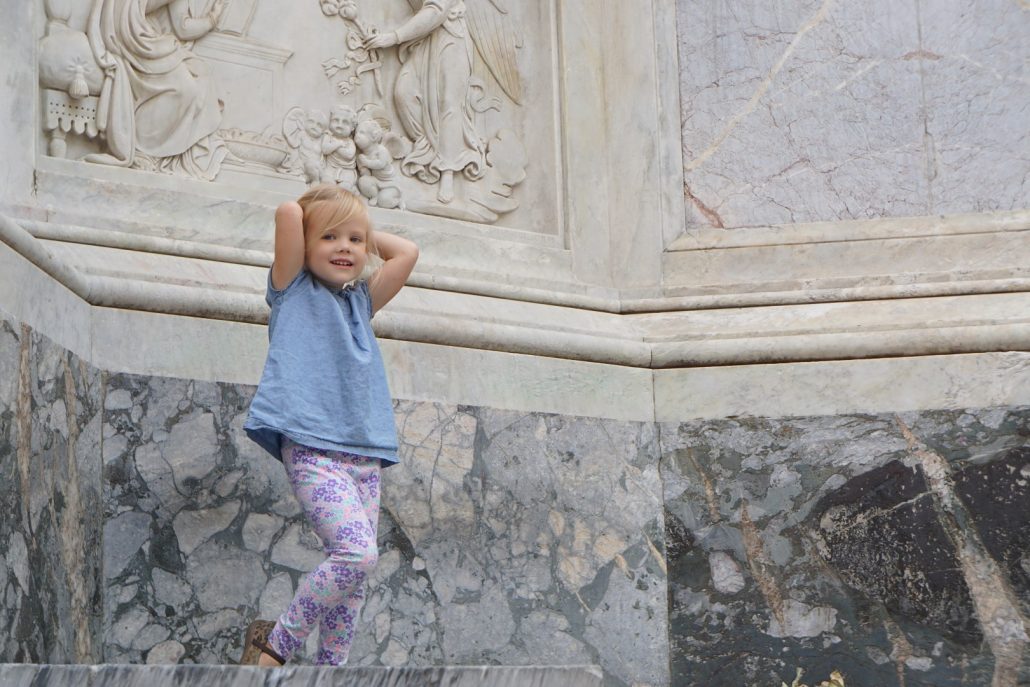 On Sunday, we went on an inadvertently adventurous journey to church and then to see the temple. Attending church in Europe was difficult for many reasons:

a) We are usually staying in the heart of downtown near the tourist sights, but the church building is usually several miles away

b) The buses don’t run as often on Sundays, so there may only be one #59 bus every hour which means we are catching the bus sometimes more than an hour before church starts so that we arrive on time (of course we missed the bus on multiple occasions and arrived late)

c) Church is in another language! In several cities they had the English translation provided through the headset and in one city (Vienna) the missionaries sat behind us and translated for us, but in many cities we enjoyed their language and practiced listening to the spirit

A couple times we took an Uber to church because we either missed the right bus or it required too many bus changes to make it to church in a reasonable amount of time.

Ever see a shoe on the side of the road or in a really weird place and wonder, “how did that shoe get there??” Well, I’ll share with you the story of a little white toddler sandal stranded on a median between an off-ramp and the freeway….

So after visiting the Rome Temple (still under construction), we decided we were really hungry. There was an Ikea not too far away and the idea of Swedish meatballs somehow struck our fancy. When we tried to walk towards the Ikea, we realized it was across this busy freeway and there was no clear path to it. We tried Google walking navigation, but it wasn’t helpful. We followed this sidewalk which looked like it might take us under the freeway, but after going under part of the freeway it curved to the right and brought us to this strange median between a left exit off-ramp and the freeway. Then the sidewalk just ended right there on the median. Why there was a sidewalk that lead to this median, I have no idea. From the median, we could see that if we could just get across these two freeway lanes, there was a sidewalk on the other side which would lead down the right side off-ramp to the Ikea. After seeing the steady traffic though and knowing we had a double stroller to get all the way across, we knew it was impossible. So, we headed back down the sidewalk and toward the temple and the bus stop.

We decided to give up on the Ikea lunch idea and head back to our apartment. Then we noticed Lucy was missing a shoe. We started searching the surrounding area and retracing our steps along the sidewalk. We were in the middle of searching when suddenly we saw the bus. The bus. Remember, we’re in Italy and you have no idea when the next bus will come. If we skip this bus, we could be here for another 45-60 minutes waiting for the next one. Plenty of time to search for the shoe while we get hungrier and hungrier (the temple was kind of in the middle of nowhere, there was not much else around besides the stores across the freeway). Having no idea where the shoe was, we decided to just hop on the bus and forget about it. The bus drove right toward the freeway, and as we passed the spot where we were standing on the median, there it was. Lucy’s lonely little sandal. She must have kicked it off her feet while we were standing there contemplating a dash across the freeway. We only brought two pairs of shoes each, so Lucy was down to one pair now. We’d have to buy her some new shoes soon.

Here’s the other shoe. Also sad and lonely.