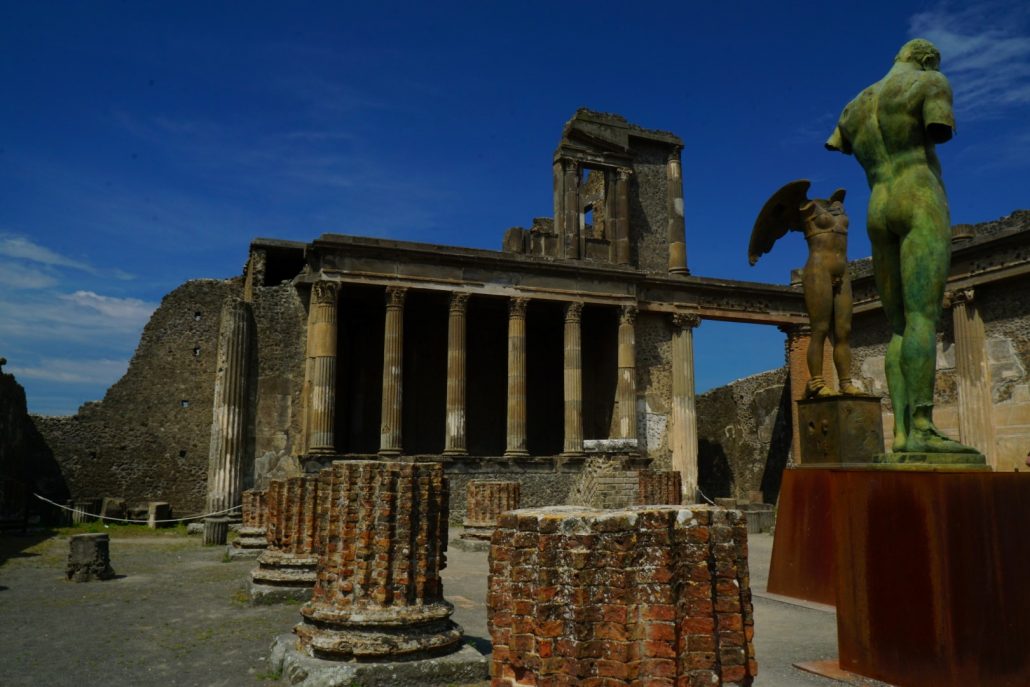 We took a day trip to Pompeii and Naples! I’ve always been so intrigued by Pompeii, the city ‘frozen in time.’ So, when planning our time in Rome I made sure we had a day to make the trip to Pompeii and discover it for myself. Planning this whole trip took a lot of time, but the great part about planning your own trip is that you get to chose when and where you spend your time. I thought Pompeii sounded awesome.

Even after reading exactly how and where to catch the right trains, there was still a good amount of confusion when we got off the train in Naples. The train station was a little difficult to manage with a stroller, and it seemed like everyone around us was in a rush so we felt rushed as well. We finally make it to the platform and the train is late (we’re still in Italy, remember?). Even though we were one of the first ones on the platform waiting for the train, when the train finally comes we are one of the last people to get on. With our double stroller it is really difficult to move quickly and be the first ones on the train. People rush around the stroller and squeeze their way on the train, and we’re left with standing room only. Such is the life when traveling with toddlers. 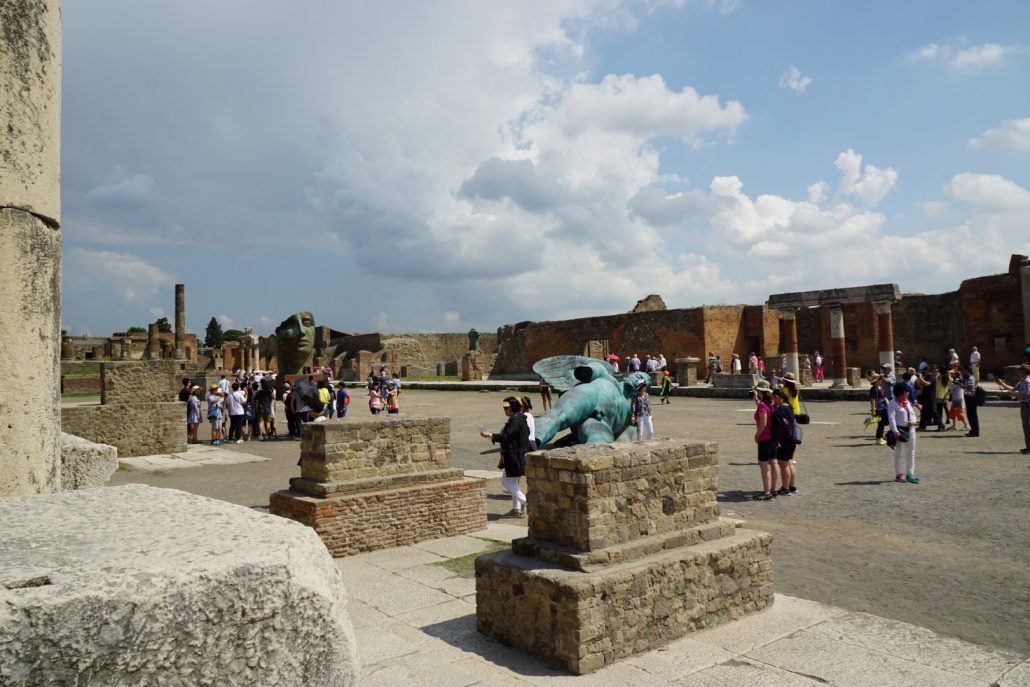 So there we are, standing on the crowded train on our way to Pompeii. This sketchy guy hops on at one of the stops and starts snuggling up to Chris. Then the sketchy guy puts his hand on the stroller handle (the distraction). Then Chris feels the backpack being tugged just a little. Chris turns and makes eye contact with the sketchy individual who immediately looks away. Chris pulls the camera bag around to the front and noticed the zipper was more than halfway open. Luckily, our camera is snuggled down into the bag really well so it would take quite a bit of pulling to get it out. Chris gave the guy a dirty look and he hopped off at the next stop.

This was not our only pickpocketing incident, and I think I forgot to write about it when I blogged about Switzerland. We were standing on the train with our stroller talking to a group of Americans who were working in Switzerland. We were only on the train for a few stops when we said goodbye and hopped off at the main train station in Bern. When Chris turned around, I noticed the bottom zipper on the backpack was nearly all the way open! We were very lucky that nothing was stolen. Only after finding out the backpack was open did Chris realize the tugging on the backpack was suspicious. He remembered someone standing behind him and turning around to see if they needed to get by (because the backpack was being pushed and tugged). The guy had gotten off at a previous stop, but left empty handed.

Two other notable incidents related to pickpockets, when we arrived in Barcelona we were standing on the subway and I had a stranger tap me on the shoulder and point out that my cell phone was in my back pocket and a prime target for a pick pocket. I thanked them and quickly moved it to a safer place. This happened a second time, but I can’t remember where I was when another kind stranger pointed out that my phone was an easy target. Gentle reminders that pick pockets are out there. 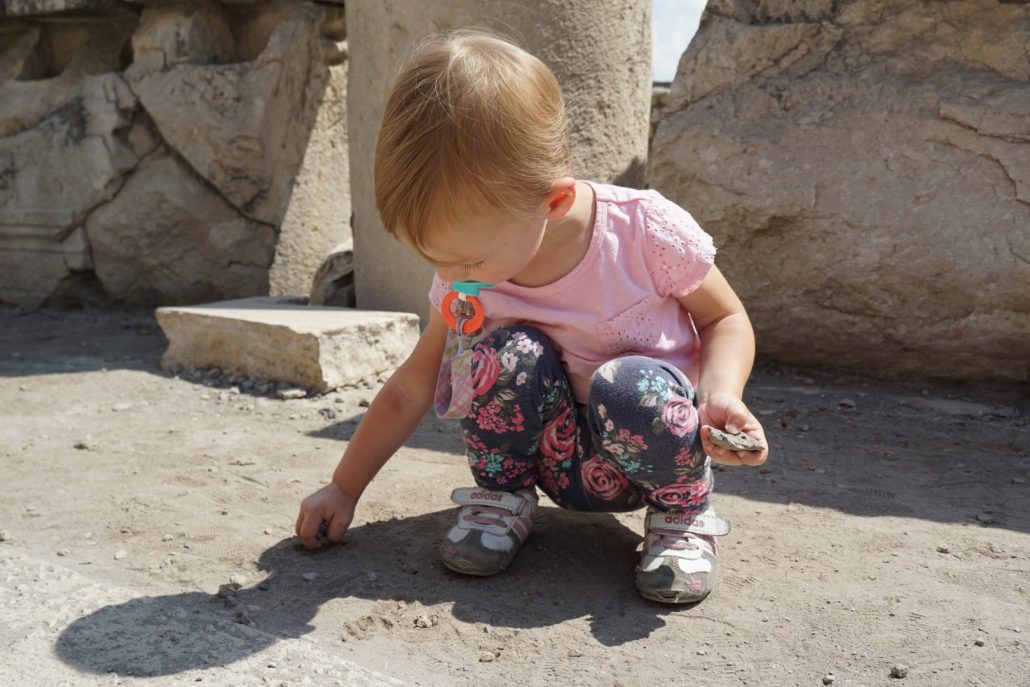 After finally pushing the stroller over the very rough stone path for what felt like an eternity, we made it to the first stop on the walking tour: the forum. This was the center of the city. And of course as soon as we stopped walking the girls hopped out and immediately started digging in the dirt and rocks. 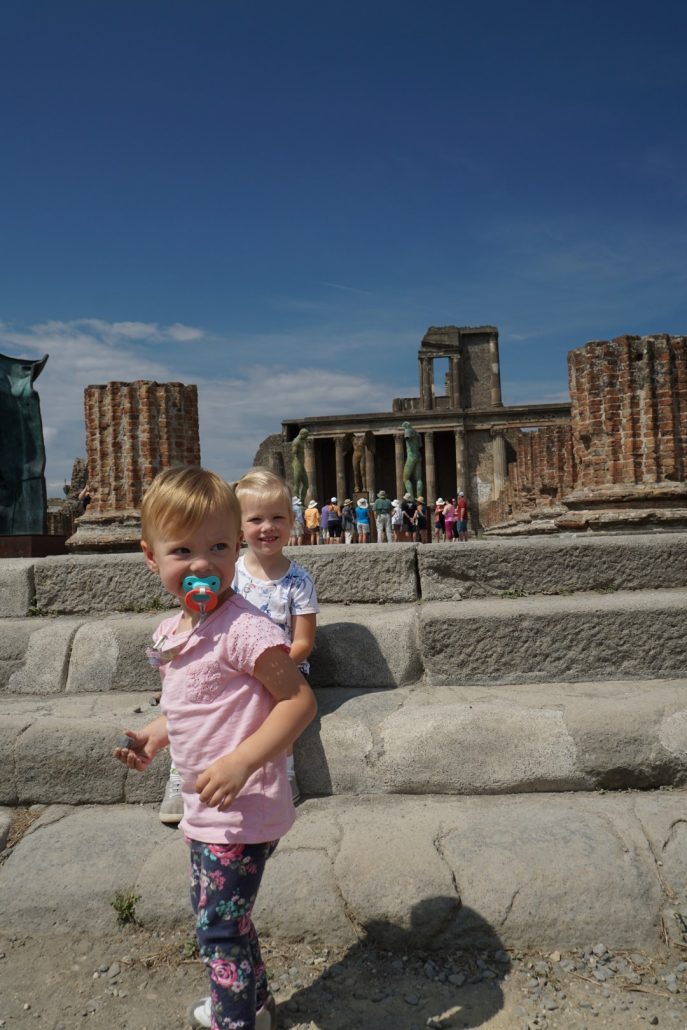 Though they lived long ago, the people of Pompeii are just like us and make some of the same kinds of decisions that we do. The columns in the basilica (their building used for a market and court of law) were not made from solid marble, but the core is made from a much cheaper material: bricks. The bricks are then covered in a marble plaster and shaped to look like fluted marble columns. Construction on a budget, we do that a lot too. 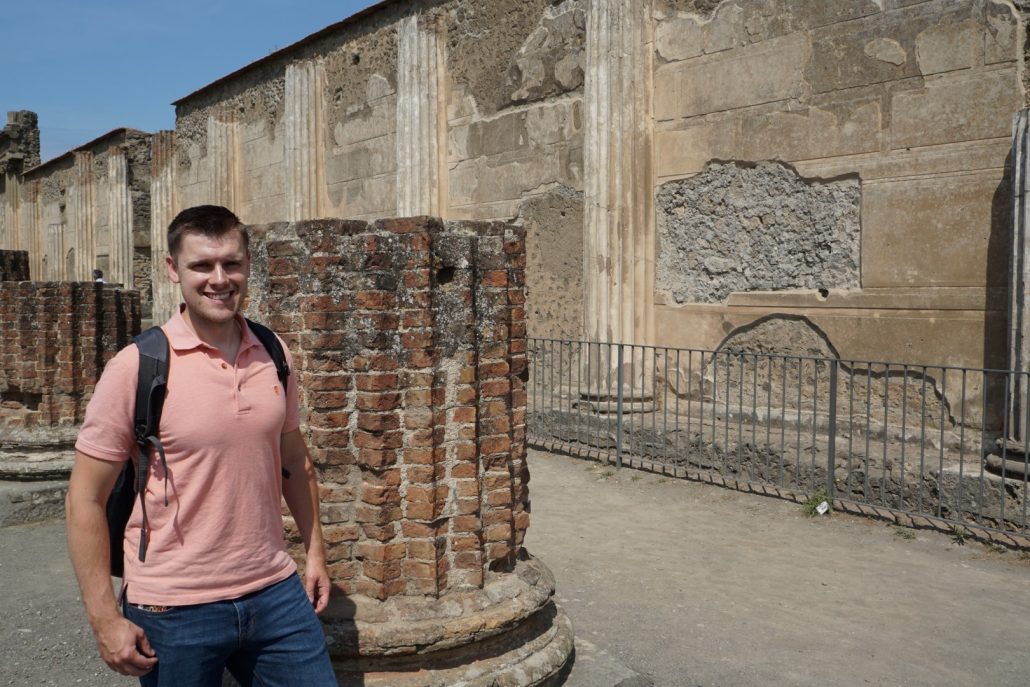 In this picture you can see the bricks and the crumbling remains of the fluted exterior of the column. 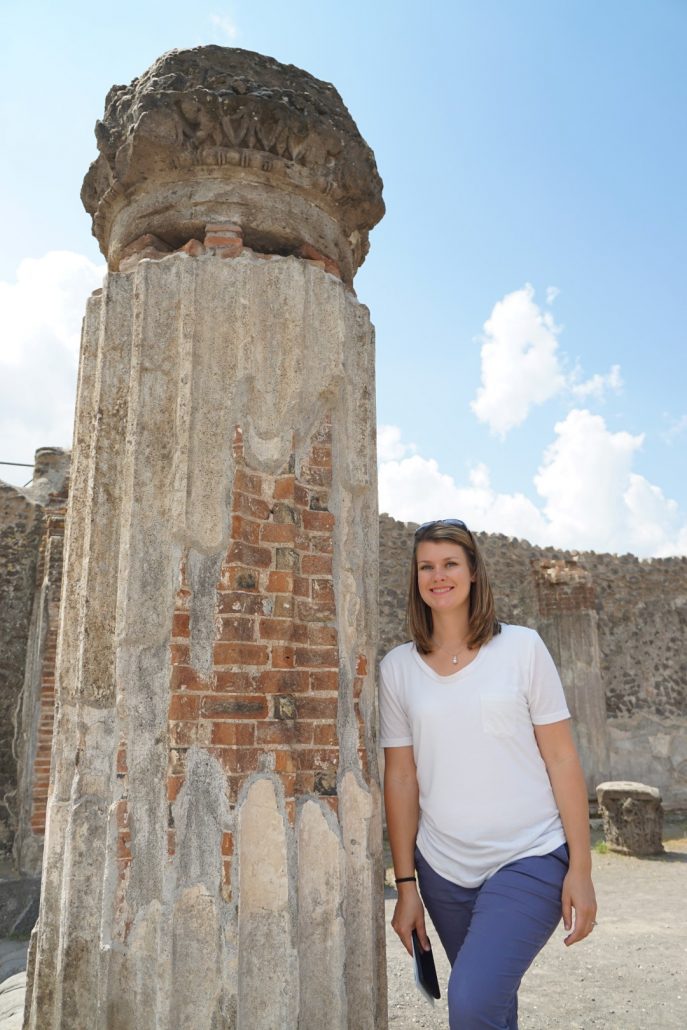 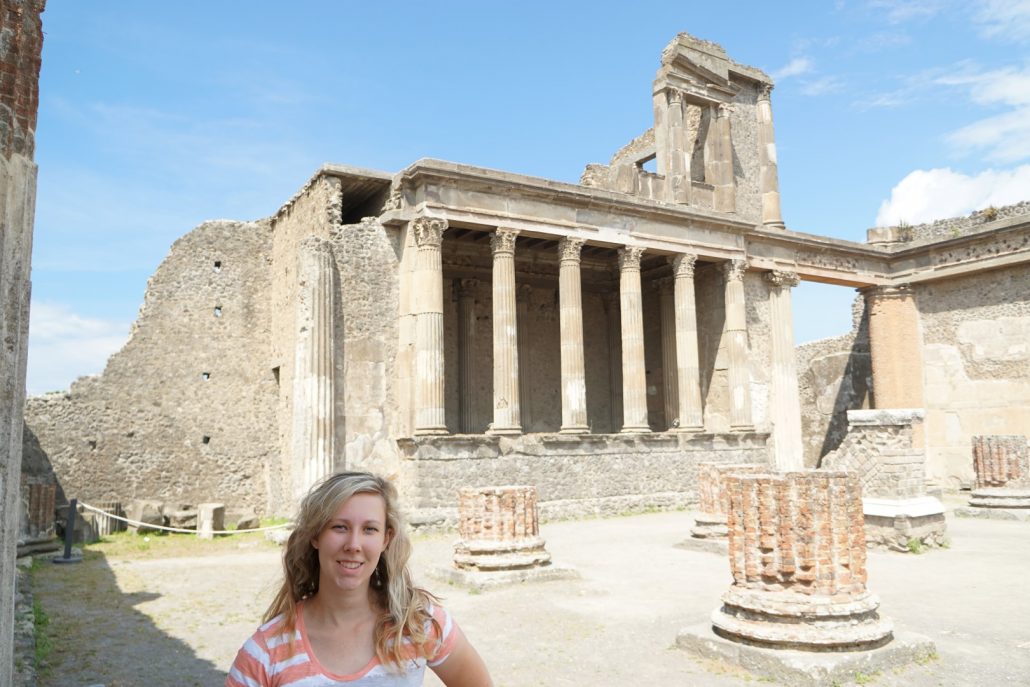 Roman baths! I am amazed at Roman engineering and what they were able to do. A handful of houses had some sort of indoor plumbing, the baths had heated floors and steam rooms. It’s amazing to learn about it all. 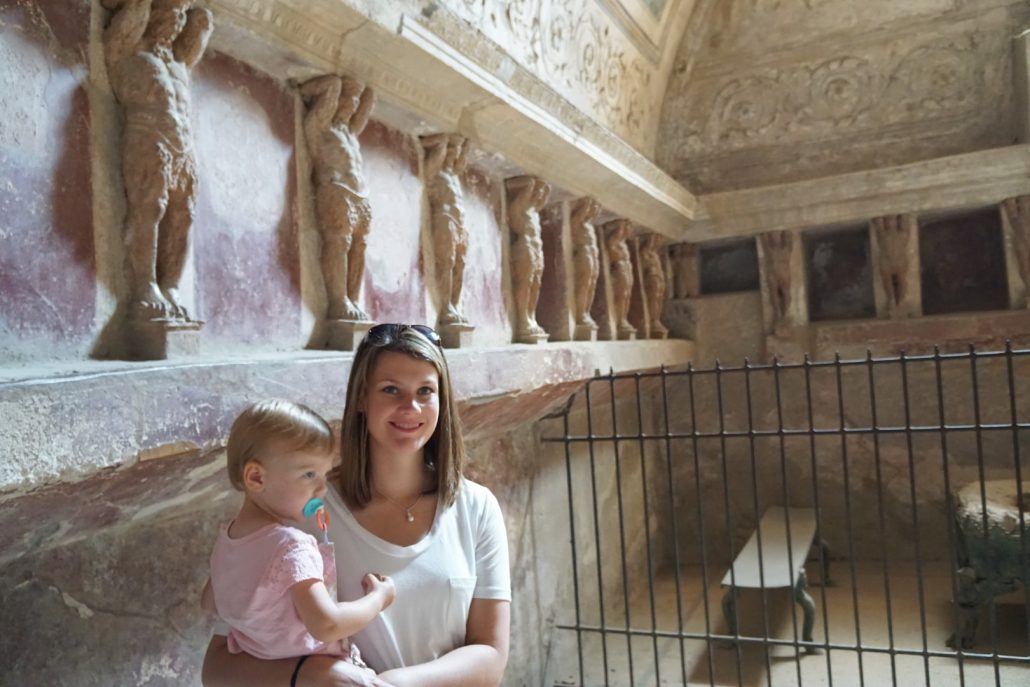 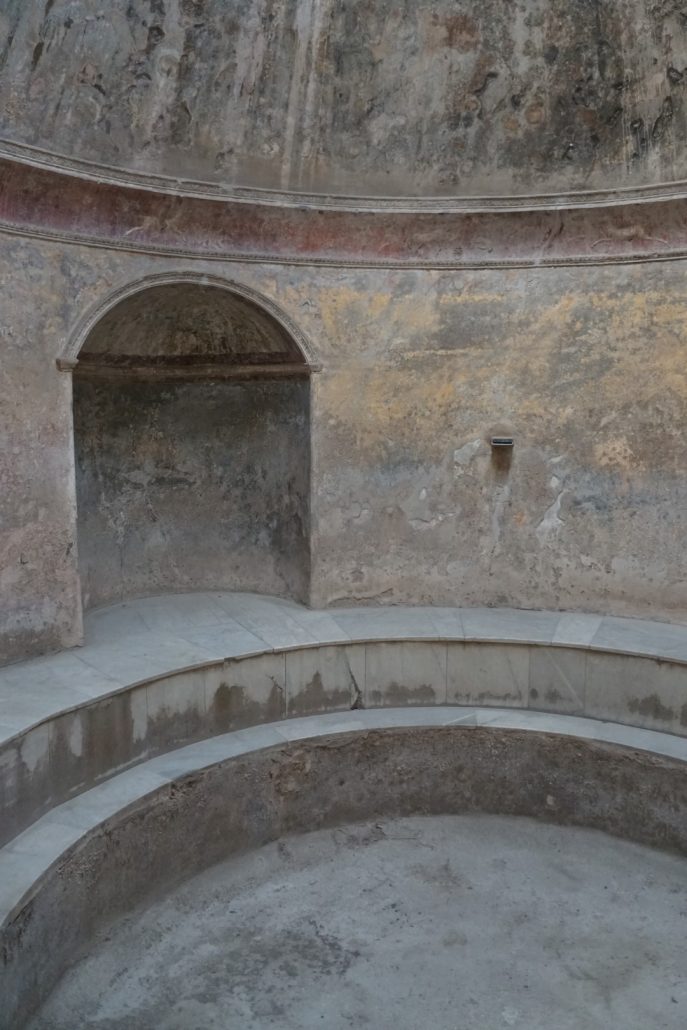 This is a ‘Beware of Dog” sign. It’s a mosaic on the front step of a house at Pompeii. We learned that the people of Pompeii did not spend most of their time at home. They would use their house mostly for sleeping, which explains why most of their houses are not very large (except there are a few mansions) and why there are numerous public areas (markets, bath houses, fast food, amphitheaters, etc.). I really wish I could step back in time and walk these streets just for a moment to really understand what life was like back then. 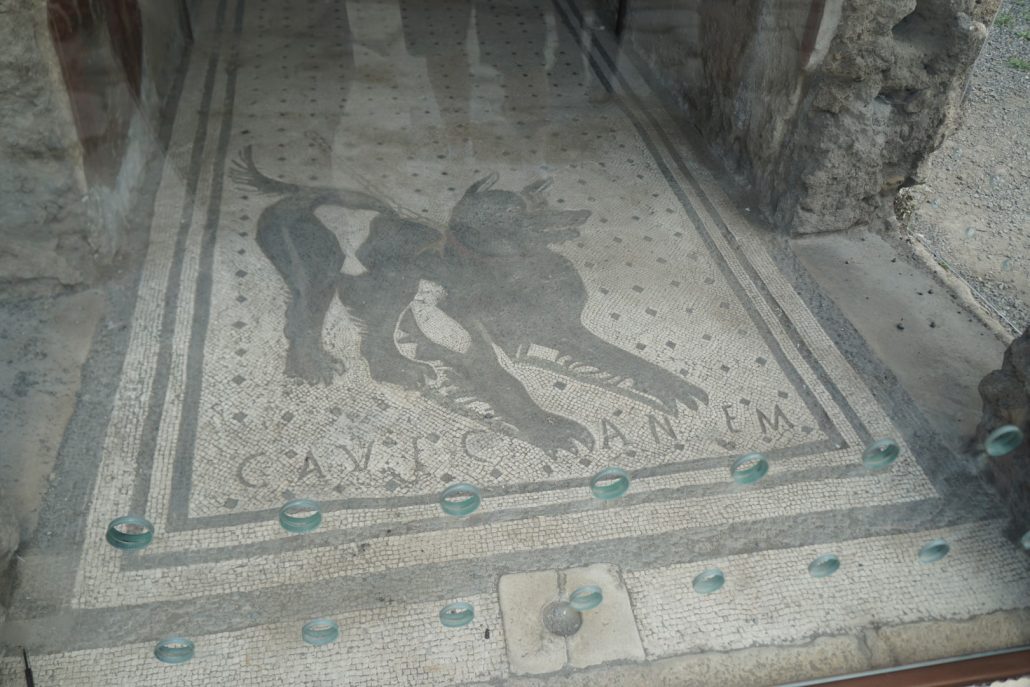 This would have been like a fast food counter. There’s even a track for a sliding door in front of the counter so they could close up shop. 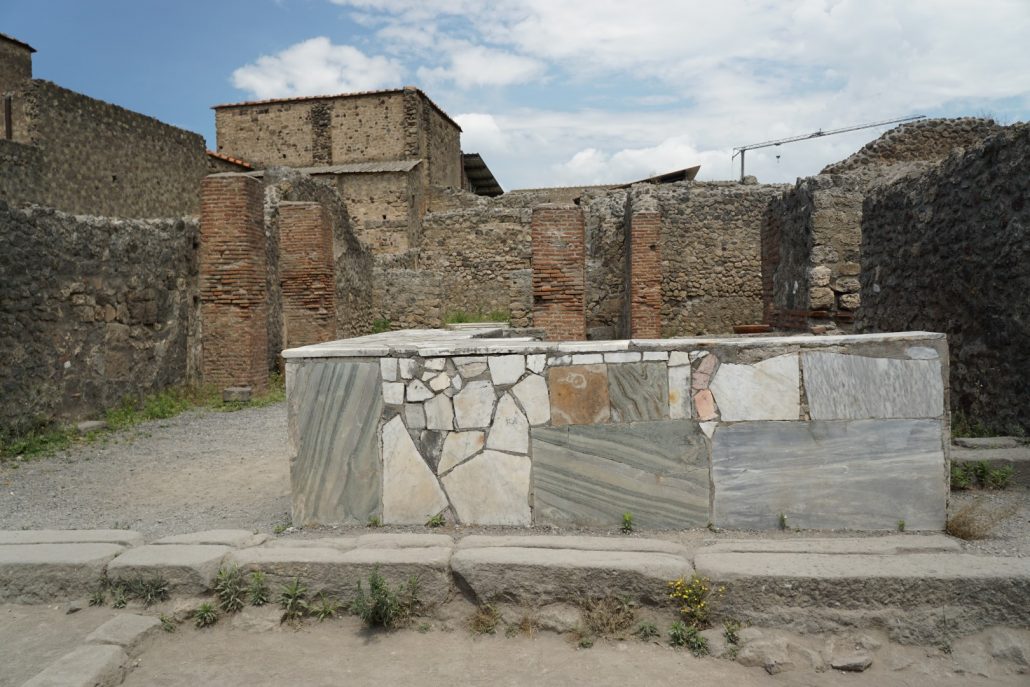 This is one of the mansions I was talking about. The house is quite large and has a beautiful mosaic on the floor of one of the rooms. 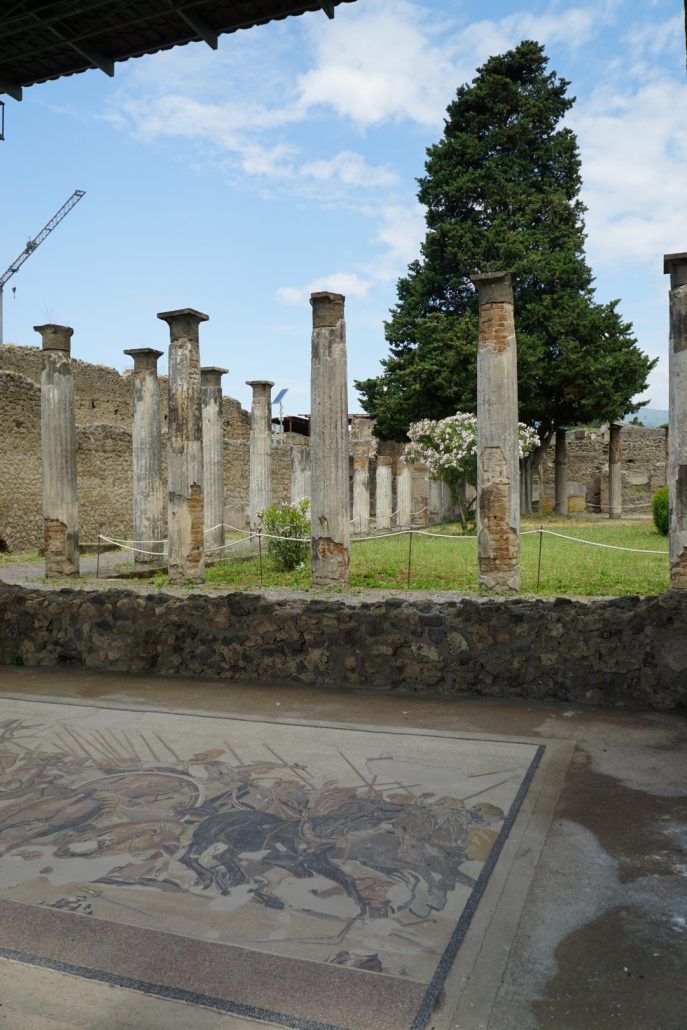 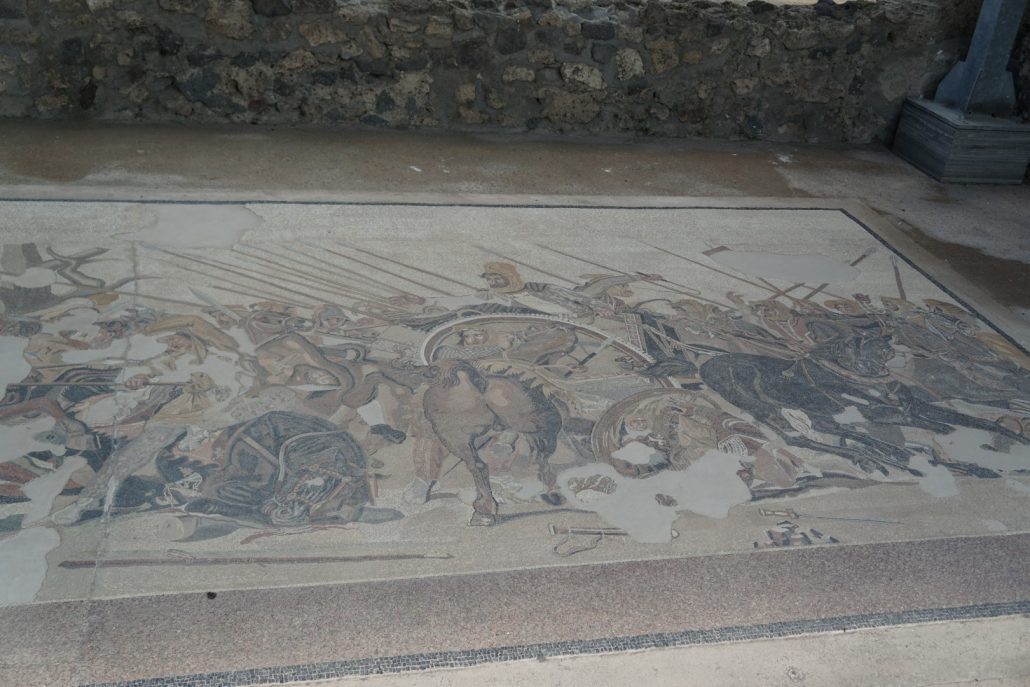 Here’s a subtle reminder that even though their houses were made from the bricks we see today, hundreds of years ago they were painted bright, beautiful colors. It must have looked so different with all the houses and buildings painted. 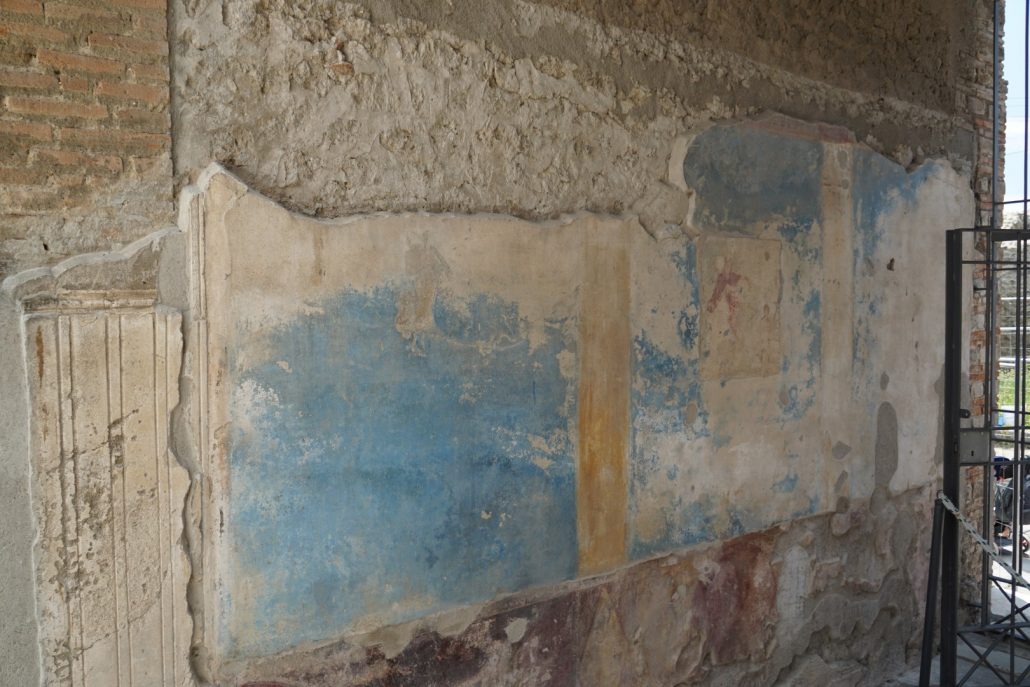 Here’s another one of the mansions. This was actually two houses that were later combined into one house. It has a beautiful garden and courtyard.

As we walked into this house, we overheard a tour guide explaining that they just reopened this building to the public. Pompeii is huge. It’s an entire city, not just one historic building. They are continually restoring the city and will sometimes close buildings that used to be open to the public and open others after restoration work is completed. The tours of the city are constantly changing as the restoration work continues. 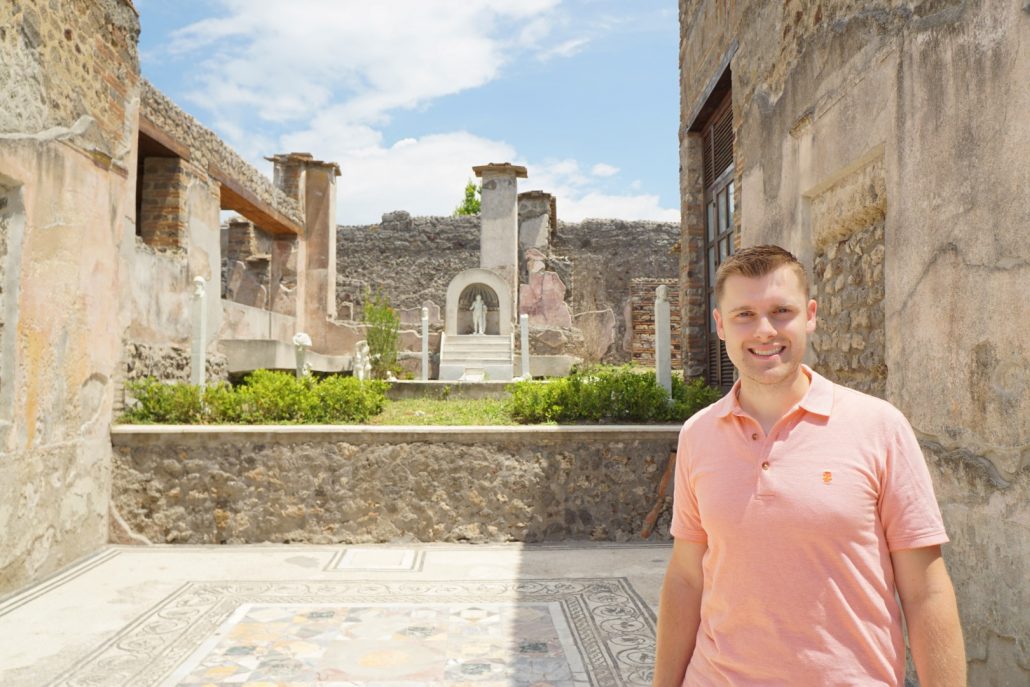 Naples, the birthplace of pizza. Mmmmm….

When we got off the train in Naples, we were walking through the ticket turnstiles when an argument and a fight broke out between what appeared to be a pedestrian and a train employee. Out of curiosity we paused for just a moment, but then we remembered what Rick Steves says: Always assume that any distractions are made to create an opportunity to pick your pockets. We kept walking and kept our pockets to ourselves.

We headed to one of the best pizzerias in Naples: Pizzeria Trianon. We had high expectations, and this pizza delivered. It was delicious. And yeah, they don’t cut your pizzas for you in Italy. You have to struggle endlessly with your own knife and fork. 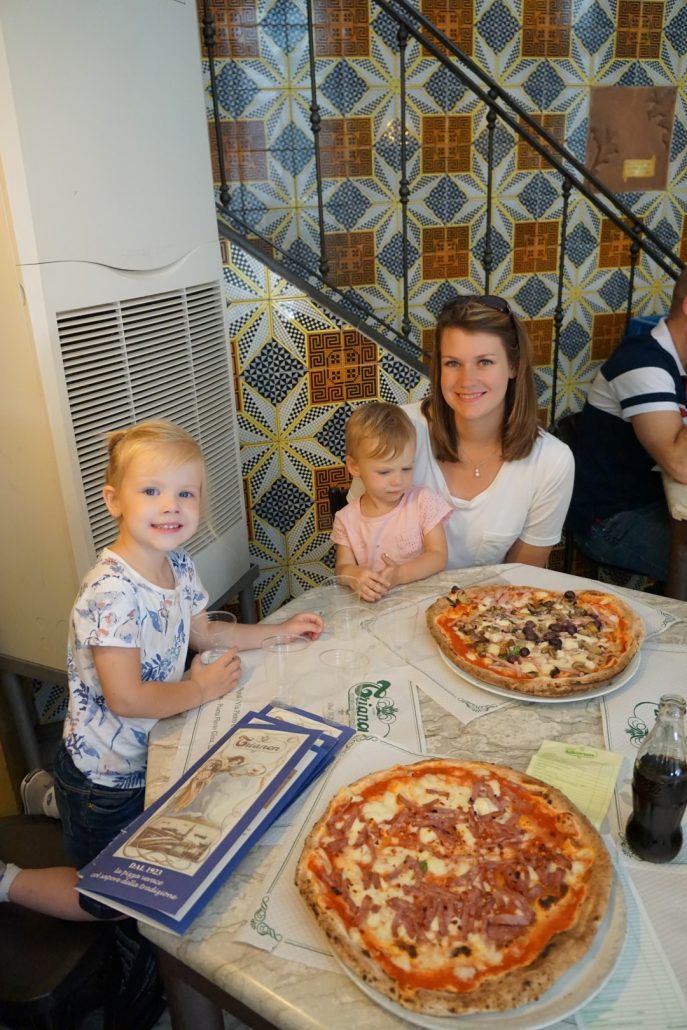 This, Pizzeria da Michele, is THE pizza place of all pizza places. We didn’t go here first because when we went to check on the line it was out the door and down the street (a moderate sized line from what reviewers said). When we came back to check, the line was completely gone. We were shocked and even though we were still pretty full from our lunch pizza we decided it was the chance of a lifetime, so we got another pizza (they only make one kind of pizza — margherita). It was delicious, but my personal preference was the Pizzeria Trianon. The additional toppings made the pizza more exciting for me.

I had planned more ambitious activities than just eating for our time in Naples, but after a long and sweltering day in Pompeii we just didn’t have the energy. We wandered around a bit and then went to sit and rest at the train station while we waited for our train. 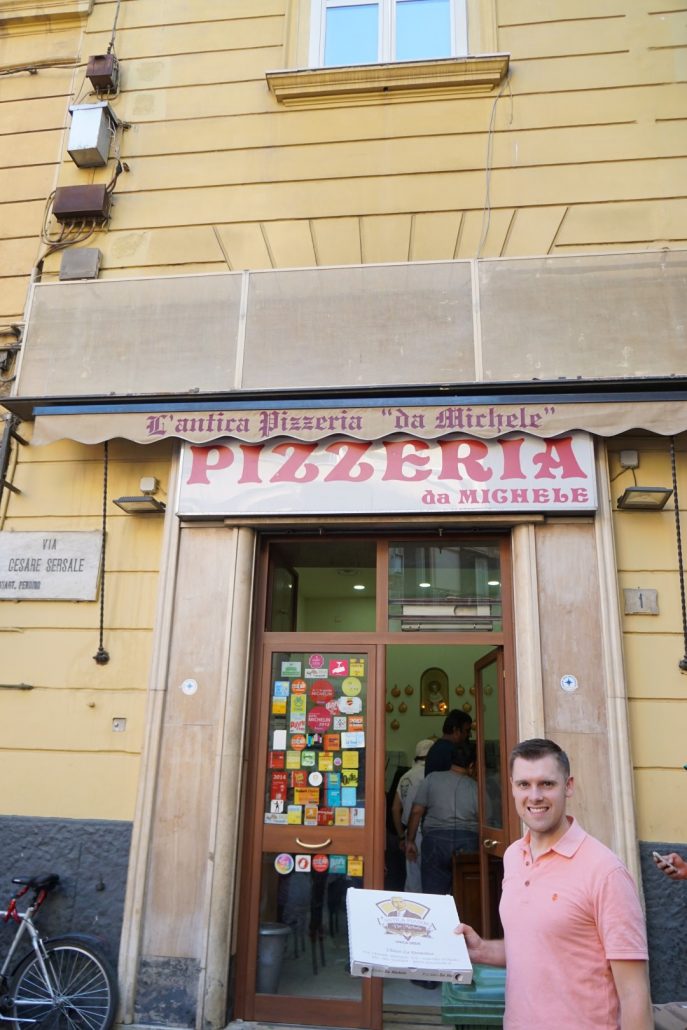 For some reason I’m just full of stories on this post. In one of the pictures below Charlotte has her hands over her ears. Charlotte hates loud noises or noises that she perceives to be loud. While we were waiting for Chris to come back with the pizza, a garbage truck pulled up and started putting all the glass recycling into the truck and then crush it. I thought he was never going to finish. He found what felt like a dozen garbage cans that needed to be dumped and crushed. Whew! He did finally finish. Thank goodness.

An Art Filled Day in Rome
Scroll to top