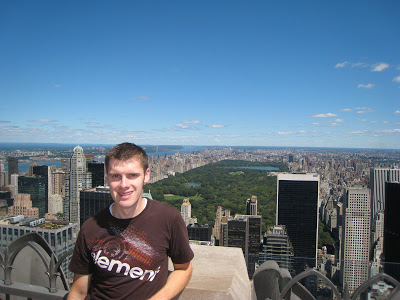 We were in New York for a whole week, our longest stop, and we had tons of fun. We bought a city pass for 7 days which would get us into at least 60 different activities, museums, tours, etc. We could see and do as many things as we could cram into 7 days.

Museums are expensive, and so if we paid $20+ per person to go to a museum, we would make sure we had time to see everything and spent half a day there. With our New York City pass it was really liberating to be able to go to a museum and stay for as long as you were interested – even if that was only an hour. Or go to a wax museum (we’d both never been) just to see what it was like. It was all “free” (we paid a good amount for the pass, but nothing compared to the total cost of each activity).

One of the first activities we did was to go to Top of the Rock. In case you’re like me and had no idea what that was, Top of the Rock is the top of the Rockefeller building. While we were at the top and looking out at the city, it seemed strange to see tons of tall buildings all crammed together and then suddenly a huge square of grass and trees, right in the middle of it all. We debated how much we thought Central Park would be worth if they sold the land.

Being two accountants, we of course had to go and walk down Wall Street and see the NYSE. 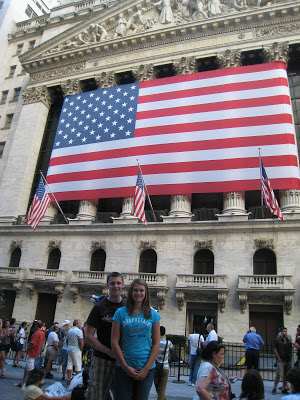 You can’t visit New York without going to the MET. I had heard it was an amazing museum, so I was excited to go. Chris isn’t as interested in art museums as I am, but because he loves me so much he comes with me 🙂 Art is a funny thing. People have very different ideas about what is art and what qualifies as a work of art. Some of the modern art pieces are… debatable in my mind. I often find works of art that I wouldn’t call art. This would be one of those pieces. A vacuum? And the yellow chair behind it? Like I said, debatable. As you can tell from his expression, I think Chris agrees with me. 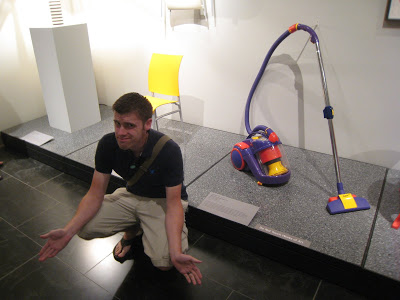 As we walked around and discussed what is art, I asked Chris to point out a painting that he thought qualified as good art. Below is a picture of what he chose. For those of you who know and love Brian Regan, in one of his shows he described how he would judge art. Forgive the terrible quality, but if you can understand him it’s really funny. Click here to listen to Brian Regan. 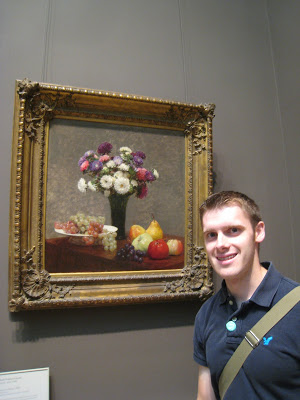 We took a walk around Central Park, and I can only imagine that the people living in New York just love coming to visit Central Park. Its the only way to really escape the city. And if you walk deep enough into the park, the trees hide all the buildings and you can enjoy nature. It really is a beautiful park. 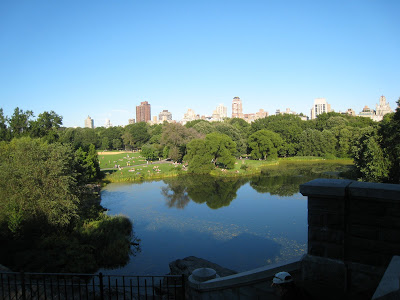 We took the ferry to see the Statue of Liberty. If you plan in advance, you can get tickets to either the pedestal or if you are lucky, the crown. We didn’t know this was a possibility, so we were not expecting to stay very long on the island, just take a few pictures and go. We happen to walk by the sign that said the ranger led tour would start in 2 minutes, so we waited. The ranger gave a very good tour, and I really learned a lot. At the end of the tour, Chris asked some question about how to get up onto the pedestal. The ranger asked if any of us had tickets to get up there. No one did. So, for some reason he said he’d let our whole group go up to the pedestal.

In the pedestal, they have a museum about the Statue of Liberty. The picture below is of the original torch. It used to be all copper, but then they wanted to make the torch light up, so they cut holes in the copper and put in these square of glass so that the light from lamps would shine through. In the 1980s they replaced the torch because this one was so badly damaged. Water was constantly leaking in and repairs were frequently needed. The new one they made was an exact replica of the original, except this time they covered it in gold so that it would still appear as though the torch was lit. 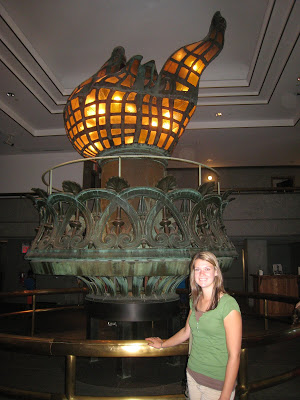 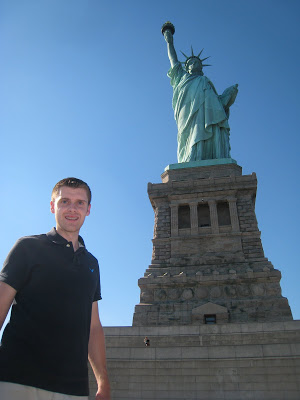 We found a restaurant in China Town that served dumplings and a few other items for a really, really great price. We got 10 dumplings for $2. The sesame pancake was also highly recommended, so we tried one of those too. The dumplings were delicious, and both of us ate dinner for $4. That’s pretty amazing, especially for New York. 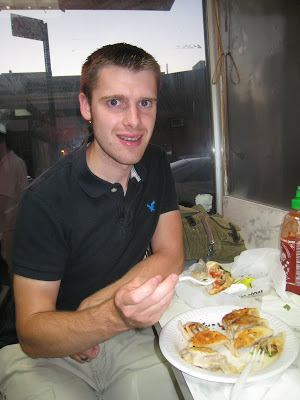 Though we had been to the Top of the Rock, we decided we still had to go to the top of the Empire State Building. It’s a must see. We decided to mix things up a bit and go at night. It was a gorgeous view of the city lights. 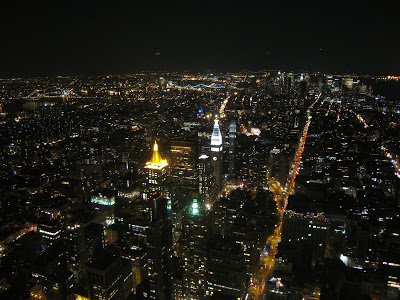 We went to one more art museum while we were in New York, the Guggenheim Museum. This is another Frank Lloyd Wright building, and I just had to see it. We didn’t spend a ton of time in the museum because there was a lot of modern art 🙂 That’s not our love, so we just saw a few of the highlights and took some pictures of the building. This building certainly stands out amongst the normal tall, boxy sky-scrapers. It is very unique in NYC. 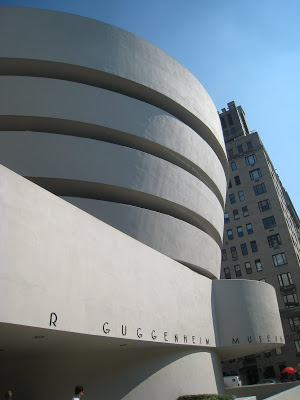 One of the highlights was of course… Wicked! It is such an awesome show, and I would definitely recommend it to anyone. We loved it. 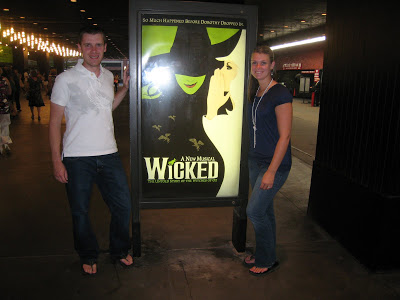 You never know who you’re going to meet in New York! This is Bill Gates! Ok, just kidding. We stopped by the wax museum. We had a great time taking pictures here.

We also have to give a big thank you to Scott & Julianne Parmenter who very kindly let us stay with them for a few days. Thank you, thank you!

We had a great time in New York, and we look forward to going back someday!