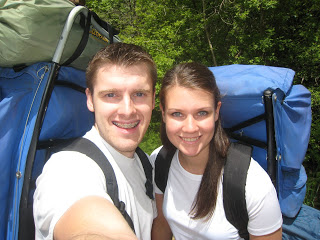 Alright, I decided to post about something more recent before I post about the Dominican Republic. In January we decided that this summer we would canoe around Bowron Lakes, a circuit of lakes in British Columbia, Canada. Since then we have been slowly acquiring camping gear.

Last month we gathered all our camping gear and said, “Let’s try it out!” I’ve never been backpacking, and Chris has never gone here in Utah, so we didn’t know where to go. Chris went down to a camping store and asked a helpful employee for suggestions. 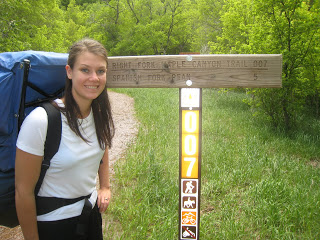 Chris carefully explained that it was his wife’s first time backpacking, and he wanted to make sure I had a good experience. With that information in mind he suggested hiking Maple Canyon to Spanish Fork Peak.

We were very excited as we started off on the hike. We were going to be hiking 5 miles to a lake which was then just a short distance to the top. 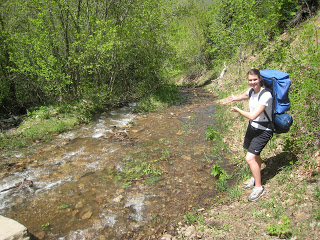 After taking the turn off to start the real trail we found it was flowing with water and we had to step lightly otherwise we’d have shoes full of water. Wet shoes on a 5 mile hike was not ideal. 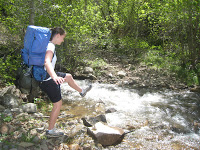 We finally reached the river that was causing the trail turned stream problem. The next challenge was to cross that river.

We decided to take off our shoes and wade across the river. We discovered very quickly that this river was snow melt and it was REALLY cold. 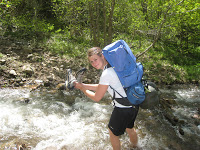 Having only hiked about a quarter mile with a backpack on, I was a little unstable as I tried to make my way across the cold, swift river. I nearly fell in… and my shoes really did fall in. 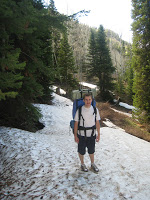 Ok, back to the story, at about 2 miles we started to hit snow! We had hiked through quite a bit of it when we stopped to re-evaluate the hike. We decided to keep going for a while. A short distance later we ran into other hikers who were just there for a day hike and were on their way back down. They gave us the report that the snow only gets worse and the “lake” at the top was covered in snow. 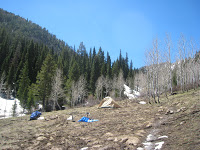 At that point we found a flat (ha!) spot of ground and decided to camp there for the night.

We built a campfire and Chris got to try out his handy-dandy new blower. It made a nice roaring campfire.

We had a good time trying out all of our gear. We spent a lot of time trying to remember all the things we wished we had brought (like a pen and paper to write that down on). So we tried to just memorize our list of items 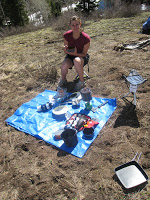 to pack for Bowron.

So on our way back down the next day we decided 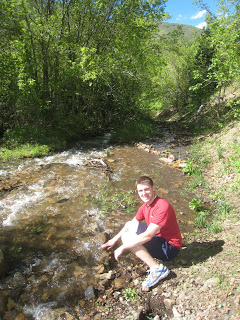 to spend some time and block the stream (not the river) so that we didn’t have to hike back down through the water.

It was kinda fun to just play in the water for a little bit. After awhile we were actually rather successful. 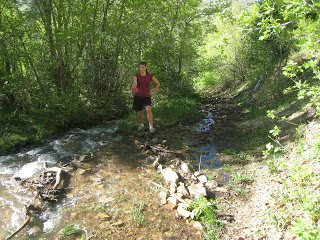 The water flow had drastically slowed. We weren’t satisfied with our work though, and we tried to stop the flow of water completely. We were unsuccessful in this venture and even after building two rows of rock wall to divert the flow we couldn’t stop it completely.

Here are a few more pictures 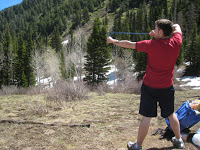 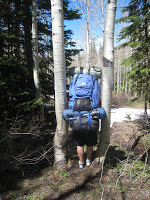 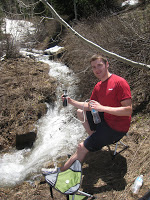 The Journey Begins…
Scroll to top